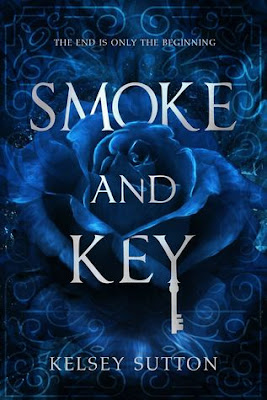 A sound awakens her. There's darkness all around. And then she's falling...

She has no idea who or where she is. Or why she's dead. The only clue to her identity hangs around her neck: a single rusted key. This is how she and the others receive their names—from whatever belongings they had when they fell out of their graves. Under is a place of dirt and secrets, and Key is determined to discover the truth of her past in order to escape it.

She needs help, but who can she trust? Ribbon seems content in Under, uninterested in finding answers. Doll’s silence hints at deep sorrow, which could be why she doesn't utter a word. There's Smoke, the boy with a fierceness that rivals even the living. And Journal, who stays apart from everyone else. Key's instincts tell her there is something remarkable about each of them, even if she can't remember why.

Then the murders start; bodies that are burnt to a crisp. After being burned, the dead stay dead. Key is running out of time to discover who she was—and what secret someone is willing to kill to keep hidden—before she becomes the next victim…

Smoke and Key is a unique standalone fantasy novel from Kelsey Sutton that is full of magic and mystery.

When she awakens and falls to the ground from her casket, Key has no idea who she is or how she came to die, only that she’s dead and the only clue to her identity is a rusty key that lies on a chain around her neck. With no memories of who they are, those who exist in Under obtain their names thanks to the items they are buried with—Ribbon, Journal, Doll---and are content with their existence in the dark shadow world they live in. But Key is curious and determined to discover who she is. As memories from her past begin to return, Key soon finds herself drawn to the dark and enigmatic Smoke yet this is only the beginning as people begin to turn up dead. Burnt to a crisp, the dead now stay dead and with the possibly linked to their former lives, Key will need to discover the truth about her past before she herself winds up a victim.

Written as a standalone tale, Smoke and Key offers readers mystery and murder in this YA tale. An easy read that concludes solidly, I was of a mixed mind where this novel was concerned. I think the concept Kelsey Sutton has come up with was a great one—individuals in various stages of decomposition with no memories of who they are find themselves in an underground world---but I feel like the execution could have been a bit better.

Don’t get me wrong; Smoke and Key was in no way a bad novel, but I feel like the story could have been fleshed out a bit better and the ending—and subsequent “big reveal” seemed anti-climactic and too easy. Maybe the limitations of it being a standalone novel let Smoke and Key down, but I was just wanting it to reach that next level and I don’t think it even really did.

I appreciated that the novel was set in Colonial times and liked the mannerisms and attitudes of the characters. Protagonist Key was easy to follow and I liked the glimpses into her past and who she was in life. Her romantic connection with Smoke plays a large role in the storyline but while I liked the significance of their romance, I just couldn’t connect the way I really wanted to. They were sweet but didn't completely blow me away.

Different and unique, Smoke and Key was an enjoyable and easy to read novel. Readers will be guessing as to who the killer is until the end and trying to piece the clues together. Not a bad novel; it just needed a little fine tuning to take the brilliant concept and really make it really shine.

Smoke and Key is worth a read for fans of Texas Gothic by Rosemary Clement-Moore and those who like their old world tales brimming with magic and undead mysteries.