Book Shelf: Keeper of the Bees (Black Birds of the Gallows) by Meg Kassel 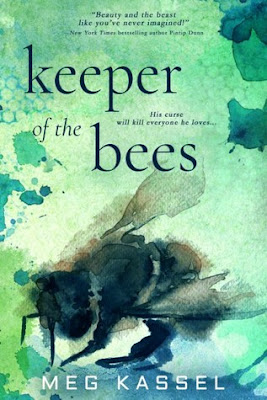 KEEPER OF THE BEES is a tale of two teens who are both beautiful and beastly, and whose pasts are entangled in surprising and heartbreaking ways.

Dresden is cursed. His chest houses a hive of bees that he can’t stop from stinging people with psychosis-inducing venom. His face is a shifting montage of all the people who have died because of those stings. And he has been this way for centuries—since he was eighteen and magic flowed through his homeland, corrupting its people.

He follows harbingers of death, so at least his curse only affects those about to die anyway. But when he arrives in a Midwest town marked for death, he encounters Essie, a seventeen-year-old girl who suffers from debilitating delusions and hallucinations. His bees want to sting her on sight. But Essie doesn’t see a monster when she looks at Dresden.

Essie is fascinated and delighted by his changing features. Risking his own life, he holds back his bees and spares her. What starts out as a simple act of mercy ends up unraveling Dresden’s solitary life and Essie’s tormented one. Their impossible romance might even be powerful enough to unravel a centuries-old curse.

Keeper of the Bees is the companion novel to Meg Kassel debut novel Black Bird of the Gallows and is captivating tale featuring unique mythology, intriguing dangers and an enchanting romance.

Dresden is cursed. For centuries his chest has been home to a hive of bees that he cannot prevent from stinging people and causing insanity. Having long ago forgotten who he once was, Dresden travels from one town to another seeking out and choosing only the worst of humanity as his victims. Stuck in an existence he despises but reluctantly accepts Dresden has never considered wanting more until the day he happens across a unique young woman who sees him like no other. Seventeen year old Essie suffers from debilitating delusions and hallucinations. When Dresden approaches her in a park, his bees wanting to sting her, Essie does not find herself afraid of him. His presence calms her raging mind and she is both fascinated and delighted by his changing faces. When Dresden chooses not to let his bees sting Essie, the two soon find themselves forming an unexpected relationship that has the power to chase the course of both their lives forever….

After immensely enjoying Black Bird of the Gallows, I have been eagerly awaiting Keeper of the Bees. The idea of being introduced to a beekeeper and getting to know what makes them tick was one I was very much looking forward to. And I have to say I was thrilled with the outcome in Keeper of the Bees. Beautifully written, structured and paced, Keeper of the Bees was a highly entertaining read that lives up well to its predecessor. Set in the same world but featuring a new storyline and two new characters Keeper of the Bees features solid writing, a mysterious and intriguing storyline and unfolds through the eyes of two very unique characters in Dresden and Essie.

Something I loved about the story was the duel perspective that allowed the reader to get to know both Essie and Dresden on such a deep level. Their voices were heartbreaking and powerful but also endlessly hopeful as they found solace and friendship in each other. It was adorable witnessing them fall in love in their own innocent, endearing way. Dresden’s long life has been full of torment and pain while Essie’s short one has been full of loneliness and isolation; it was nice to see them find some measure of happiness, especially as this building relationship pushed the storyline onwards.

Essie’s voice especially is sharp and Kassel beautifully depicts the life of a young woman living with an unknown “illness” that affects her mental stability. There is so much stigma that surrounds mental health in today’s society that I really appreciated seeing Meg Kassel write a character who suffered from an affliction—even if there was a supernatural element woven into her suffering too—while also highlighting that Essie was still very much a person in and of herself. A person with a unique personality who had the ability to rationalize her situation and care about those around her, including her Aunt Bel who herself offers Essie unconditional love and support.

From beginning to end, Keeper of the Bees is an engaging story. With plenty of emotion and adorable moments, Kessel writes Dresden and Essie’s story perfectly. There’s supernatural mixed alongside a murder mystery with Dresden’s past woven together with both Essie’s present and future. Able to be read as a companion to Black Bird of the Gallows or simply on its own, I highly recommend Keeper of the Bees for readers wanting a story with rich, unique mythology but still featuring all the elements you’d expect to make it great!