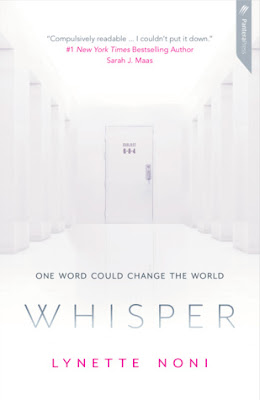 “Lengard is a secret government facility for extraordinary people,” they told me.

I believed them. That was my mistake.

There isn’t anyone else in the world like me.

For two years, six months, fourteen days, eleven hours and sixteen minutes, Subject Six-Eight-Four — ‘Jane Doe’ — has been locked away and experimented on, without uttering a single word.

As Jane’s resolve begins to crack under the influence of her new — and unexpectedly kind — evaluator, she uncovers the truth about Lengard’s mysterious ‘program’, discovering that her own secret is at the heart of a sinister plot … and one wrong move, one wrong word, could change the world.

Whisper is Lynette Noni’s latest release and is an enchanting story of mystery, government secrets and teens special abilities with the power to change the world.

Jane Doe has been locked up in Lengard, a secret government facility for extraordinary people for more than two years. Known as subject Six-Eight-Four, Jane has remained silent throughout the number of invasive and often painful experiments they have performed on her, refusing to utter a word. Yet her resolve is threatened when her latest evaluator turns out to be a young man only a few years older than Jane whose unexpected kindness and care begins to break through the carefully placed shields Jane has built around herself. Trusting a Lengard employee is the last thing Jane wants to do, but as she begins to discover startling secrets about the facility, Jane is about to discover more about the power of words, and herself, than she ever could have expected.

Lynette Noni first captured my attention with her debut novel Akarnae and has held my heart ever since with her intelligent writing style, bold characters and grand sense of adventure. While Whisper is a different kind of Noni novel than what I have read in the past, I can still find echoes of these characteristics I love and am really hopeful and looking forward to seeing more of this series.

Introducing readers to an intriguing character shrouded in mystery in the form of Jane Doe, Whisper begins with our protagonist a prisoner—for the lack of a better word—of an underground organisation that has been experimenting on her and treating her as less that human. Lynette Noni keeps the mystery surrounding Jane a secret for as long as possible; only allowing small snippets of her past and her abilities to be touched on so to build the suspense.

I found the idea of Speakers and the concept as a whole to be very creative. I have to be honest though; as much as I love Lynette Noni and enjoyed this novel, there were times when I found myself somewhat disconnected from the story. I’m not sure what it was exactly as Whisper was fast paced and enjoyable. I think Jane, along with Ward and many of the other characters, have a lot of promise, although I’ll be keeping my fingers crossed that Noni avoids the dreaded love triangle.

I loved that the novel set in Sydney. I actually wasn’t anticipating the story to be based on home soil, so I was both surprised and appreciative when the revelation was made as Jane was discovering more about her location. Considering the way in which Whisper ends, I’m looking forward to an Australian based setting and seeing things progress.

An enjoyable read with hints of romance, danger and excitement, Whisper easily left me ready for more and keen to see what will happen to the characters next!