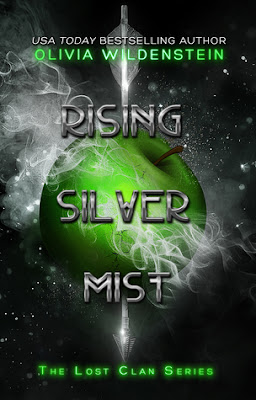 THERE WERE THREE THINGS I WAS CERTAIN ABOUT.

First, I would never kill another person. But when a family friend murdered my father, I destroyed her with a power I didn't even know I possessed.

Second, I would never strike another bargain. But faeries could bring the dead back, so when Cruz offered to revive my father, I accepted.

Third, I would never marry an enemy, but every bargain comes at a price. The price of mine: I had to marry Cruz and move to the faerie isle.

For the first time in my life, I wondered if death wouldn't be a kinder end.

Rising Silver Mist is the third novel in the sensational Lost Clan series by Olivia Wildenstein and brings to a close Catori’s story with heart racing action, sizzling romance and edge of your seat surprises!

A lot has changed since Catori Price returned to her hometown of Rowan after her mother’s death. Not only has she discovered that faeries really do exist, but she’s descended from an ancient Native American tribe of hunters whose mission is to hunt and kill them. Oh, and she’s also fallen hopelessly in love with a faerie Prince who is also technically already engaged to someone else. And now, Cat finds herself drawn into dangerous fae politics and schemes when she accepts a bargain from an enemy in order to save her father’s life. Taken to the Faerie world of Neverra, Cat will need to draw upon hidden powers if she wants to prevent the destruction of all that she holds dear……

Olivia Wildenstein captivates once more with this thrilling latest instalment in her breathtaking faerie series. Mixing fae mythology with Native American folklore and heritage, the Lost Clan has been an absolute joy to read. Even though Wildenstein is set to thrill fans with a fourth novel, Raging Rival Hearts featuring characters Lily and Kajika’s story, Rising Silver Mist brings to an end the story arc featuring main character Catori. And with spectacular fashion I might add!

The intricate and intriguing way Wildenstein has woven this series together has always made for tremendous moments of action, romance and elements of mystery as various deceptions and revelations were revealed. I’ve loved the tone of the series which has always been fast paced, exciting and highly entertaining. Main character Catori has been wonderful to follow and I couldn’t fault her at all; she truly was just a stellar protagonist who has taken us as the reader on a fantastic journey with her at the helm.

Olivia Wildenstein has won me over with electric elements of romance woven into the story with Cat having three potential love interests in the series; Cruz, Kajika and Ace. Surprisingly Wildenstein manages for the most part to avoid the stereotypical love triangle (although in this case I think a square would be more accurate) perfectly with Cat very sure of her feelings quite quickly and adamant in who her heart belongs to. I won’t give away spoilers, but I’ve very happy that this guy managed to keep his girl as I just do love him oh so much.

Full of fun and so much life, the minor characters in this series offer perfect support throughout the series. It has been largely interesting waiting to discover their motivations and purposes within the story. I have highly enjoyed following Catori with Olivia Wildenstein winning a fan in me. My heart yearns for the moment I can join Lily and Kijaka in their story and I’ll be keeping my eyes out for Raging Rival Hearts so I can read it as soon as it releases!