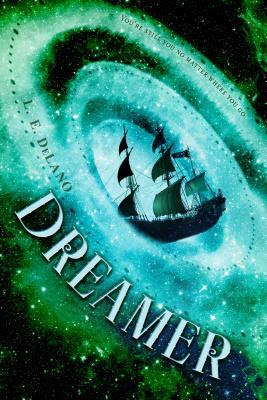 This thrilling sequel to Traveler doles out adventure and heartbreak in equal measure as it takes readers through a kaleidoscope of intricately crafted worlds of wonder, discovery, and danger.

You’re still you no matter where you go.

Jessa has learned the hard way that traveling to alternate dimensions isn’t all delicious, glittering desserts and fancy parties: it also means accidentally running into people she thought she’d never see again. Still mourning a devastating loss, Jessa isn’t really prepared for the arrival of a reckless version of someone she once loved who is now bent on revenge. Add an increasingly complicated relationship with her best friend Ben, the reappearance of an old enemy, and the threat of the multiverse collapsing, and Jessa’s got a lot on her plate. She may be destined to help save an infinite multitude of worlds… but in the end, all Jessa really wants to do is save her friends.

In Dreamer, the young adult fantasy follow up to Traveler, author L. E. DeLano delivers a gripping, emotional story that will leave readers on the edge of their seat.

Dreamer is the second and final novel in L.E. DeLano's Traveler duology and is a fun and enjoyable follow up to it's predecessor that take readers into various dimensions and on dangerous missions.

After the heartbreaking events of the previous novel, Jessa St Clair is trying to adjust to life without her soul mate Finn. Moving on is difficult when the one responsible for his loss is still out there and determined to make Jessa suffer even more. Add in her relationship with her best friend Ben that is getting even more complicated and the appearance of a Finn from another dimension who is beginning to set her heart racing and Jessa is dealing with a lot. Then an old enemy resurfaces and suddenly choosing between who she loves isn't the biggest thing Jessa has to deal with; she'll need to use her Traveler abilities to save the world....if it isn't already too late.

Author L.E. DeLano is back with the sequel to her debut novel Traveler in the form of Dreamer, once again following teenager Jessa who has the ability to travel to various dimensions and realities. I think Dreamer was a very good sequel. Traveler was a mixed novel for me--I enjoyed it, but it failed to blow me away. I think Dreamer was just a little bit more enjoyable in my eyes.

After everything she went through in the first novel, protagonist Jessa finds herself in a tough spot. She's lost her boyfriend Finn, but finds herself getting a piece of him back with the appearance of Pirate Finn; a Finn from another dimension who she has previously met and felt a connection with.

Aside from the overshadowing threat of Jessa's former teacher Ms. Eversor and her Dreamer Rudy who plan to change the world forever, L.E. DeLano focuses Dreamer around the complex relationship between Jessa and Finn. I have to say, I am very much loving "Pirate Finn". I think he just has so much chemistry and charm and he and Jessa are very sweet. I think L.E. DeLano explored this new romance in a way that still respected the relationship Jessa had with the Finn from the first novel.

Taking into consideration that one person can't really replace another even though they are technically the same person; albeit a little different, I think L.E. DeLano approached this perfectly given the circumstances--she left me satisfied with the eventual outcome and not feeling like I had been duped.

Overall, Dreamer was a decent follow up to the first novel. L.E. DeLano has created an interesting world of fantasy and different realities and I feel that this sequel concluded the original storyline well, leaving the characters with nothing but endless possibilities.