Book Shelf: Bound to You by Alyssa Brandon 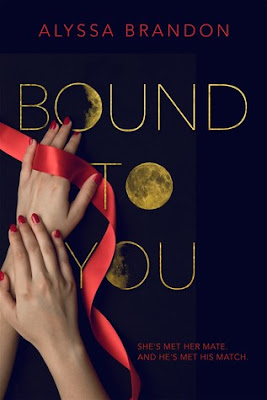 A teen werewolf finally meets her destined soulmate only to discover that he's not quite what she expected in this steamy debut romance.

Megan Ross has been waiting her whole life for her mate to come and sweep her off her feet. But the wolf she meets on the beach is NOT the sweet gentle boy she's been dreaming of. Instead, he's a warrior, one whose suffering has led him to lock his heart away in a prison as cold and hard as a diamond, who fights to resist the bond and their deep sexual attraction.

Far from home, with a soulmate who is still a stranger, Megan learns that the path to true love isn't quite as straight and easy as she thought . . .

Bound to You by Alyssa Brandon is a NA paranormal romance and introduces readers to an urban fantasy world of supernatural creatures, undeniable attraction and swoon worthy romance.

Eighteen year old Megan Ross has waited her whole life to find her mate. The daughter of an alpha, Megan knows exactly what she wants and the werewolf she meets on the beach at a party is definitely not what she always envisioned. Brooding and cold, James is the leader of a legendary tier of warrior werewolves tasked with protecting the werewolves from their natural enemies; creatures known as wraiths. Moving from her family’s home to her new pack’s compound in Canada, Megan wants nothing more than to connect with James, yet he continually tries to push her away. Haunted by his past and determined to keep Megan at arm’s length, James’s actions may be the thing that keeps Megan and him finding true happiness. The attraction and bond between them is undeniable, but will Megan be able to convince James to give their relationship a shot? Or was there never a chance to begin with?

I’m going to be honest; in a lot of ways Bound to You reads like fanfiction. Well written, deeply enjoyable fanfiction, but fanfiction none-the-less. And yet, gosh, there was something about Bound to You I really found myself enjoying. Unfolding primarily through Megan’s POV as well as the occasional chapter from James, Bound to You introduces readers to a world of werewolf packs and a century’s old war between them and their enemies, wraiths as well as a romance with a reluctant male lead and a determined heroine.

Bound to You centres around Megan who has finally found her mate in the form of surly and reluctant James, who, even though he can’t help but desire her, isn’t too happy about finding his other half. I must admit, I find myself intrigued by the world introduced by Alyssa Brandon; more than I thought I would when the story first began. The concept surrounding James and his fellow pack members is interesting and I genuinely liked them all. Living in a barren and empty manor, I enjoyed seeing these warrior wolves loosen up and connect as Megan made attempts to bring them together.

The relationship between Megan and James plays a large part in the story and I thought they had a decent connection. The attraction and chemistry was there and considering the idea of mates and what finding a mate entails, I appreciated seeing Megan and James get to know each other throughout the story. I think this made it all that more satisfying when they eventually began to find a rhythm together.

As I previously mentioned, I was intrigued by many of James’s pack and am keen to see if Brandon will writes novels featuring the other characters. Lucy especially has been set up to feature some kind of painful history that I’m sure could transfer over into further storyline arcs. Either way I’ll be keeping an eye out to see what Alyssa Brandon does with this series next.