Book Shelf: Amid Stars and Darkness (The Xenith Trilogy #1) by Chani Lynn Feener 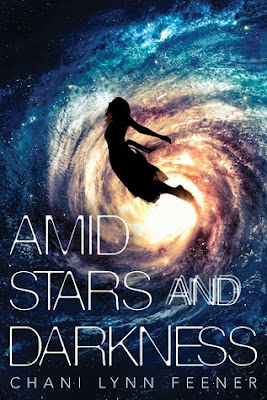 Delaney’s entire world is thrown into chaos after she is mistaken for Lissa Olena, an alien princess hiding out on Earth in order to escape an arranged marriage.

Kidnapped by the princess’s head bodyguard, Ruckus, and imprisoned in an alien palace, Delaney is forced to impersonate the princess until Olena can be found. If she fails, it will lead to an alien war and the eventual enslavement of the entire human race.

No pressure or anything.

Factor in Trystan, the princess’s terrifying betrothed who is intent on unraveling all her secrets, and her own growing feelings for Ruckus, and Delaney is in way over her head.

Get lost Amid Stars and Darkness, in this YA sci-fi romance from debut author Chani Lynn Feener.

Amid Stars and Darkness is the first novel in The Xenith Trilogy by Chani Lynn Feener and is a deeply addictive intergalactic YA tale that mixes danger and excitement with smoking-hot aliens, political intrigue and stunning romance.

For recent high school graduate Delaney, her whole world is thrown into chaos when she is mistaken for an alien princess and is kidnapped by the princess’s head bodyguard Ruckus who thinks she’s trying to escape an arranged marriage to a tyrant prince. Taken to the planet of Xenith, Delaney finds herself kept prisoner in the palace and forced to impersonate the missing princess until she can be found. Acting like the spoiled Lissa Olena is harder than Delaney anticipated and as she battles her growing and confusing feelings for Ruckus, Delaney will have to convince Olena’s terrifying betrothed Trystan and a whole palace full of people she’s the runaway princess. Yet with outside forces determined to ignite war between two alien races, Delaney is about to discover that those who are against the marriage will stop at nothing to keep their people from being bound to Trystan’s, even if they have to kill her in the process……

I have to say I was highly impressed with Amid Stars and Darkness and thoroughly enjoyed this novel! Chani Lynn Feener caught my attention from the opening chapter and had me entranced all the way though. I loved the characters and the chemistry they featured together. I was fascinated by this intergalactic world Feener has created and the few different races of aliens she introduced. The politics seemed interesting, and I thought it clever how she tied it in with Earth. Honestly, I’m very much looking forward exploring more.

Our main character Delaney was someone I found very easy to get behind. She was strong voiced and likable. I liked that she was not afraid to say what was on her mind and that she refused to cower before the aliens she met who were superior to her in both strength and ability. She wasn’t a weak minded heroine and I felt she fit her role perfectly; Delaney was someone I enjoyed reading about and following.

Amid Stars and Darkness has two powerful male personalities in Ruckus and Trystan and you know what? I really love them both. Ruckus won me over from the very beginning, while Trystan and his motives aren’t brought to light until later on in the novel. I liked that Ruckus was affectionate with Delaney and I’m not just talking the searing kisses either, but the soft touches, kisses on the cheek and brush of fingertips simply because he had to be touching her in some way. It was very endearing.

The ending of Amid Stars and Darkness was fantastic, even if it was definitely a killer cliff-hanger. Now I don’t want to give away any spoilers, but I am worried about the possibility of a love triangle as the trilogy continues. Personally, I hate them in general, and dislike the idea that anything could come between Delaney and Ruckus…..but I really ended up liking Trystan too. If there was no Ruckus I’d be shipping Delaney and Trystan, but there is a Ruckus, so I’m hoping Chani Lyn Feener doesn’t mess with their relationship. I’d love to see her pair Trystan with someone else though….even Marianna.

Ending in spectacular fashion, Amid Stars and Darkness left me dying for more. Chani Lyn Feener opens this trilogy wonderfully and sets the second book up with the conclusion of this first instalment. I can’t wait to join Delaney and Ruckus again and will be keeping my eyes peeled for the release of the next novel in this thrilling sci-fi series!