I'm beyond excited to be taking part in the Blog Tour for Time Weaver: Heart of Cogs by Jacinta Maree today thanks to Xpresso Book Tours!

Not only is she an incredible author, but Jacinta is someone I'm honored to consider a friend and I'm stoked to share her latest release Time Weaver: Heart of Cogs with the world. This is a wonderfully unique steampunk read I definitely recommend! 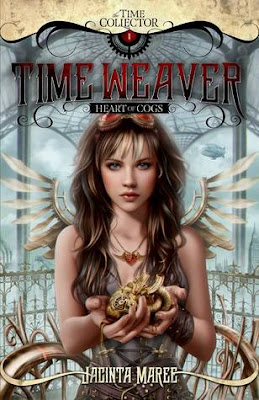 Klaus and Elizabeth boarded the large airship to make the long trip across country to Gothsworth. The airship glided across the skies. The large balloon housed rows of seats, cafes, an indoor garden, and open balconies for people to look over the railings. Clouds settled overhead, casting a long, grey blanket across the horizon. Klaus’ eyes trailed down his arm, his fingers lightly touching the taint of Nikolas’ corruption.

“What did you wish for?” he asked.

Elizabeth turned away from the window at his question. She glanced down at his arm and reached across to soothe the rash. “You have it too?”

“When it comes to magical wounds, we are connected.” Klaus pulled his sleeve down. “What did you wish for?”

“I’m not entirely sure,” she answered honestly. Klaus gently nodded and then turned away, showing disinterest in further conversation. He proceeded to act cold toward her for the rest of the trip, pretending to be interested in the inflight newspaper to avoid her questions. And as they walked, he intentionally walked too fast, making it difficult for Elizabeth to keep up. Every time she checked to see if everything was okay, he’d feign ignorance and brush it aside. He couldn’t explain exactly why he acted this way. It wasn’t his disinterest in her company, despite his body language saying that it was. Whenever they were alone together, he couldn’t help but feel overwhelmed by her. As soon as they sat in the car Lady Rose sent to collect them at the port, he understood the feeling. Vulnerability.

Gothsworth consisted of large columns of houses stacked on top of each other like shelves and domed around a grand cathedral in the centre. Bridges connected the segregated community in criss-crossing channels, while automatic trolleys moved up and down each column in massive, cage elevators. The entire complex resembled a beehive, a city squashed into four quarter circles. The entire community had been jammed packed so tightly together that the only space remaining was on top of their neighbours’ roof. As earthquakes were the deathly fear of the city, they installed massive steam powered pegs that gripped the earth and stabilized the entire foundation.

Elizabeth craned her head back as the high-rise towers disappeared into the low hanging clouds. Even with the giant pegs, the buildings would wobble and shift. Lady rose lived at the top of the tower, which must have been seen as a luxury. The driver escorted Klaus and Elizabeth to one of the pulleys and it clicked and clanked its way up the structure, passing by other houses so close Elizabeth could see through their front windows. She gripped the handle bar as the open cage swayed with the wind. The trolley came to a shaky stop outside the top house, opening up to the rock garden and outwards to a massive earth coloured two-story manor. At the front door, they were greeted by an elegant woman waiting for them.

Born in Melbourne Australia, Jacinta Maree considers herself a chocoholic with an obsession with dragons and Japan. Published in 2012 to USA publisher Staccato Publishing, Jacinta writes a variety of genres from YA paranormal, steampunk, horror and fantasy. Winner of 2014 Horror of the year and best selling author, Jacinta writes to answer all of her absurd questions and to explore themes and characters not often seen in main media.
Visit Jacinta:
Website | Goodreads | Twitter | Facebook