Book Shelf: The Way Back Home by Carmen Jenner 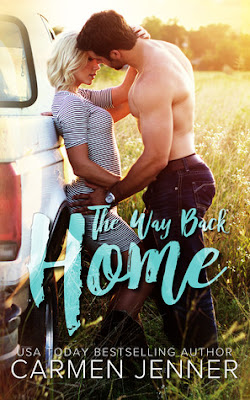 August Cotton shouldn’t be here. When a tragic accident calls him home to Magnolia Springs, this returned Veteran adds his parents to the list of things he’s lost in recent years, right along with his IED detection dog and his left leg. As the sole guardian of his four-year-old sister, August must rely on his Marine training in raising a tiny hellion who’s as stubborn as he is. But the Corps could never prepare him for this. Nor could they prepare him for Olivia Anders, a woman who’ll stop at nothing to get her way.

As owner of Paws for Cause, Olivia is no stranger to the broken men and women who return home from war. She’s no stranger to broken dogs either. In fact, she’s made it her mission to pair the two and enrich both of their lives, but pairing ornery and aloof August Cotton will take some work. The last thing August wants is some pushy southern woman occupying his parents’ bed and breakfast and forcing him to open up about the hell he narrowly escaped, but that’s exactly what Olivia intends.

They complete one another, and yet they can’t stand to be in the same room.

Can Olivia make this hardened Marine feel again and finally show his heart the way back home?

*** Intended for a mature 18+ audience only. This book may contain triggers for some readers.

The Way Back Home is Carmen Jenner’s stunning latest release and is a beautiful companion novel to her tale Toward the Sound of Chaos that can be read together or as a standalone. Intense, emotional and uplifting, The Way Back Home is perfect for fans of Alice Clayton and Abbi Glines who enjoy solid romance and feisty characters.

Olivia Anders runs a successful organisation called Paws for Cause that unites rescue dogs with returned servicemen and women often suffering from the physical and mental effects of war. For Olivia, there has been no man she couldn’t help, no dog she couldn’t place….until she meets August Cotton. After losing both his leg and his IED detection dog in an explosion overseas, August came home a broken man whose life took an even more tragic turn when his parents were both killed in an accident and August was left the sole carer for his four year old sister. Struggling with his own demons and his ability to look after his sister, August doesn’t want anyone’s help, especially the stubborn, firecracker Olivia. Determined to prove to him he’s not beyond redemption, Olivia sets out to save August, but with his demons all too real and his pain all too strong, will August be the one veteran that Olivia isn’t able to help?

Ahhh, Carmen Jenner has done it again; as she always does! Rich, romantic, funny, sassy, sweet, painful, beautiful, emotional…..The Way Back Home had it all. Unfolding through Olivia’s POV as the main character, with the occasional chapter from August POV’s thrown in for good measure, The Way Back Home was a beautifully told novel that introduces readers to two fantastic characters who had very real demons but who managed to find and make a home with the help of each other and an unexpected band of teenagers, dogs and even an adorable piglet.

Something I’ve always loved about Carmen Jenner’s novels is how she’s able to weave real, painful emotions into her stories with fiery characters and sensual romance. The Way Back Home is a lovely example of this, depicting the struggle of those who have served their country face upon their return home and the often unacceptable way society treats them. There are a few great services and individuals out there that are able to help them, and I loved seeing this in our main character Olivia.

Olivia and August are really powerful personalities. Strong and independent, Olivia has experienced her own horrors and traumatic experiences in the past and this allows her to relate to the veterans she strives to help, including August. I liked she was sweet and very caring, but also feisty and sharp with her words—a great balance.

And I have to give Carmen Jenner props for the way she wrote August Cotton and the way she depicted his relationship with Olivia, authentically depicting the struggles he faced, his temper and his violent outbursts he often couldn’t control. Scarred both inside and out, August was a wounded man who struck out at those closest to him. Jenner didn’t sugar-coat things, but also made it very clear that what August was doing wasn’t okay. Olivia understood why these incidents were unavoidable, but she also acknowledged that it wasn’t okay, and I really liked that Jenner made her characters acknowledge and face this.

Filled with fabulous characters including an adorable four year old and two teenagers who worm their way into Olivia’s heart, The Way Back Home is an emotional and occasionally heartbreaking read that will entrance you with its romance and beautiful tale.

Source: Sent for review by Give Me Books Promotions and the author (Thank you ladies!)
Publisher: Independently published
Format: Kindle ARC
Release Date: May 29th 2017
Purchase: Amazon US | Amazon UK | Amazon AU | Amazon CA
Final Thoughts: A great NA tale that readers are sure to love, I highly recommend this one and will without a doubt read whatever Carmen Jenner releases next!