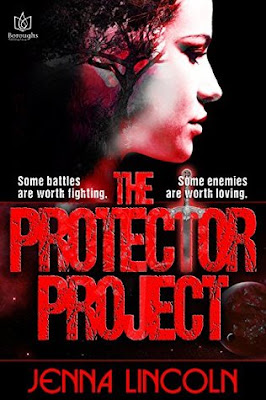 Teen soldier Mara de la Luz is about to find out what makes her so special that some would kidnap and kill her—and others, willingly die for her.

Mara is a 16-year-old soldier who’s spent years fighting a war that’s lasted generations. Wide-eyed children, some just turned thirteen, rarely survive their first fights despite her best efforts to train and lead them. What she thinks she wants is to uncover the root causes of the war between the Protectors and the masked Gaishan, maybe find a way to end it. But what she really wants is a future—for herself and the others—beyond the battlefield.

Then she’s injured in combat, and when an enemy fighter not only heals her wounds but reveals his face, she sees the promise of all she desires. This cunning teen Gaishan has answers to her questions, but first she must commit treason and travel beyond the boundaries of her world. She must brave a place where everything rests on the point of a blade: her loyalties, her friends, her heart.

The Protector Project is Jenna Lincoln’s debut novel and is an intriguing tale of twists and turns that will draw you in and keep you guessing all the way through.

Sixteen year old Mara de la Luz is a Protector; a soldier who has spent years training, fighting and battling against her people’s sworn enemy, the Gaishan. Fierce, brave and determined, Mara is the leader of her cohort and content to continue the battle against the masked Gaishan, even though secretly she would love more from life. Yet when an injury on the battlefield sees Mara saved by an enemy solider, Mara soon begins to discover that not everything is as it seems and the truth is going to change her life forever………

Heading into The Protector Project I wasn’t really sure what to expect. The premise sounded interesting, if not mysterious and I found myself intrigued to discover just what was going on; something that remained the same throughout the entire story. The Protector Project was a delightful blend of simplistic living and advanced technology that really highlights the different societies existing in The Protector Project.

The world within The Protector Project really isn’t what is seems and as the main character Mara slowly comes to discover this, so too do we as the reader. This is one of those instances where as the reader, you only know as much, or as little, as the protagonist knows and as Mara begins to discover the truth about her world we discover alongside her.

Personally I really liked Mara’s voice and the character Jennifer Lincoln wrote her to be. She has a lot of courage and ability, but she also managed to have personality. I enjoyed the innocence she had regarding a lot of the world around her and the childlike wonder she expressed as she learnt to do everyday things like read and write within the Gaishan world.

Dalin is a great love interest, supporter, friend and somewhat savior to Mara in The Protector Project. Coming into the story as someone who saves Mara’s life, Dalin’s involvement is initially what forces Mara to see her world through different eyes and it’s with his help that she manages to leave behind her role in the project and discover unexpected truths.

There’s many different elements that make The Protector Project an enjoyable read and I’m impressed with what I’ve read so far. Fantasy, magic and nicely told battle scenes blend together with friendship, family and romance, and are all tied together and topped with mystery to create a debut that is sure to leave you ready for the next instalment!

Source: Sent for review thanks to YA Bound Book Tours and author Jenner Lincoln (Thank you guys!)
Format: Kindle ebook
Buy it: Amazon | Barnes & Noble | Kobo | Smashwords | The Book Depository
My Recommendation: Fans of good fantasy will enjoy this.
Cover: I don't think the cover necessarily does the book justice.
Will I read sequel/continue with series: Yes. I look forward to reading more.