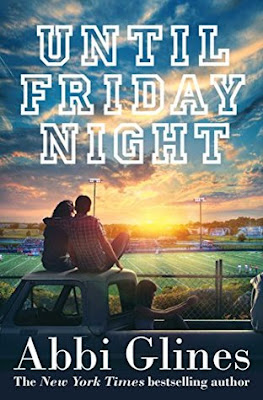 To everyone who knows him, West Ashby has always been that guy: the cocky, popular, way-too-handsome-for-his-own-good football god who led Lawton High to the state championships. But while West may be Big Man on Campus on the outside, on the inside he’s battling the grief that comes with watching his father slowly die of cancer.

Two years ago, Maggie Carleton’s life fell apart when her father murdered her mother. And after she told the police what happened, she stopped speaking and hasn’t spoken since. Even the move to Lawton, Alabama, couldn’t draw Maggie back out. So she stayed quiet, keeping her sorrow and her fractured heart hidden away.

As West’s pain becomes too much to handle, he knows he needs to talk to someone about his father—so in the dark shadows of a post-game party, he opens up to the one girl who he knows won’t tell anyone else.

West expected that talking about his dad would bring some relief, or at least a flood of emotions he couldn’t control. But he never expected the quiet new girl to reply, to reveal a pain even deeper than his own—or for them to form a connection so strong that he couldn’t ever let her go…

West Ashby is one of the stars of his high school football team. He’s good-looking, popular and never lacking in female companionship, but West is also hiding a secret. His father is dying of cancer….and its killing West. No one seems to understand his pain, until a moment of weakness sees West spilling his secret to Maggie Carleton; his best friend’s cousin, and the only person who even comes close to understanding what West is going through. Two years ago Maggie’s world was torn apart by a senseless death, and she hasn’t spoken a words since. Moving in with her aunt, uncle and cousin is harder than she expects, but it’s not until West confides in her that Maggie finally begins opening up. Connecting in a way neither expects, West and Maggie soon find themselves slowly beginning to fall for the other, and as they both battle their own pain, and demons, it’s only with the help of the other that they finally begin to really feel…..

It’s no secret that I’m an Abbi Glines fan. I love her storytelling abilities and the way in which she manages to create complex, likeable and beguiling characters, but there’s no doubt in my mind that Until Friday Night is her best book to date! I suppose after reading so many stories that tend to appear similar by an author, so it’s sometimes refreshing to have them take a step back, and in a new direction, and begin a brand new series.

That’s what Glines does with Until Friday Night, the first book in her The Field Party series, set to take us back to Texas football games, sweet new romances and sensual connections. Introducing us to not only to two incredible main characters, but a new bunch of boys I’m sure we’ll all see get a story, Until Friday Night does a great job telling it’s individual tale but also beginning to set up the world Glines plans to explore and all the possibilities that come along with it.

Until Friday Night was a highly addictive read. It’s one of those books you pick up intending to read a few chapters, but then find yourself unable to put it down. Abbi Glines really hit a note in me with this highly emotional but beautiful book. Every aspect of it seemed perfect, from the setting, to the characters, the dialogue and of course of authenticity and realness that seemed to come from it.

Both West and Maggie really won me over with their depth and loyalty to each other. Glines gave them real issues and allowed them to have a common connection that developed beautifully over time. Maggie was a really honest, sweet kind of girl and I really enjoyed her quiet maturity. She complimented West, who was a womanizer, but also just a troubled young man at the end of the day who had a good heart at his base.

Unlike some of Glines previous books, the romance in Until Friday Night develops slowly over time, but is in no way no less powerful than if the characters had have dived straight into it. In fact, seeing them bond and share so much with each other, whilst their strong friendship develops into a beautiful romance was perfect. I can’t fault them as a couple, or as individual characters who I really came to care for and adore.

Emotional, endearing and beautifully told, Until Friday Night is a great release from Abbi Glines that leaves me extremely excited about all the possibilities this new series holds. Highly recommend!

Source: Sent for review by Simon & Schuster Australia (Thank you Jen!)
Format: Format
Buy it: Bookworld | The Nile | The Book Depository | Amazon
My Recommendation: Best Abbi Glines book yet
Cover: It's nice--I like the picture it forms.
Will I read sequel/continue with series: YES! Can't wait for more of these characters!