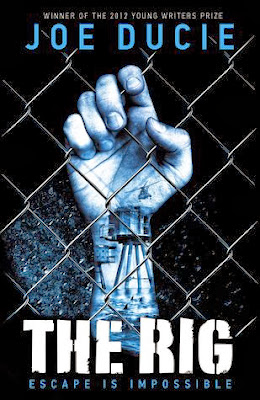 Fifteen-year-old Will Drake has made a career of breaking out from high-security prisons. His talents have landed him at The Rig, a specialist juvenile holding facility in the middle of the Arctic Ocean. No one can escape from The Rig. No one except for Drake...

After making some escape plans and meeting the first real friends of his life, Drake quickly realises that all is not as it seems on The Rig. The Warden is obsessed with the mysterious Crystal-X - a blue, glowing substance that appears to give superpowers to the teens exposed to it. Drake, Tristan and Irene are banking on a bid for freedom - but can they survive long enough to make it?

Drake is an action hero to rival Jason Bourne and the CHERUB team in this debut author's fantastically imagined sci-­‐fi nightmare.

The Rig by Joe Ducie is a harsh, riveting read that features an intricate plot, brave characters and plenty of mystery. Set in a juvenile detention center where secrets rage and nothing is as it seems, The Rig will appear to your inner escape artist as nothing ever has!

I was actually quite surprised by The Rig. After having such high expectations, it started off slow for me and I began to worry that I wouldn't enjoy it, but after 50 pages or so, I found myself swept up in Will's desperate tale. Admittedly, there were a few slower moments than others, that lost me for a bit, but for it's majority, The Rig is a fast paced, engaging read.

Set on "The Rig", a prison for the worst juvenile offenders in the middle of the Atlantic Ocean, this book is masterfully told and is Prison Break meets Fringe. Fans of mystery will enjoy putting the clues together as protagonist Will and his friends attempt to discover the goings on on The Rig while they plot their daring escape.

I liked Will, I did, even if I never outright loved him. I certainly appreciated his position. He wasn't your typical no-good-teen offender and his quick thinking and deep rooted honor helped endear him to me. Will has a lot of challenges to face throughout The Rig, but I found the intricate, surprising plotline managed to keep me entwined in Will's story. I had to know if he'd manage to do what no other ever had and escape of The Rig.

Admittedly, The Rig will appeal to the male population first and foremost--I think if you're a guy this book is right up your alley, but women who love plenty of action and unforeseen mystery will appreciate the story Joe Ducie has woven together. With some supernatural elements thrown in for good measure, ones I did not see coming, The Rig, is fierce until it's final page. Dark, harsh and riveting, I'm looking forward to seeing what Joe Ducie has up his sleeve next!

Source: Sent for review by Hot Key Books (Thank you Sandra!)
Format: Paperback
Buy it: Bookworld | The Nile | The Book Depository | Amazon
My Recommendation: Enjoyed Prison Break but like paranormal? The Rig is for you!
Cover: Oh, this cover is awesome! The picture doesn't do the physical book justice!
Will I read sequel/continue with series: I'd very much like to see what happens next, so yes.