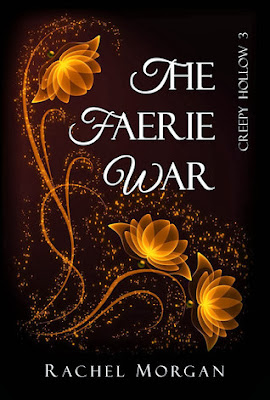 Violet Fairdale is in big trouble. Her home is gone, her beloved forest lies in ruins, the guy she gave her heart to has deserted her—and she doesn’t remember any of it. The powerful Lord Draven is taking over, brainwashing guardians into fighting for him. No one is safe from the evil spreading throughout the fae world.

As alliances are forged between the remaining free fae, Vi struggles to reclaim her identity and figure out where she belongs in this new world. When someone from her past shows up, life gets even more complicated. He brings with him a long-forgotten weapon and an ancient prophecy that places Vi at the center of the fight against Draven. With the future of the fae world at stake, can Vi carry out the prophecy’s instructions before it’s too late?

Marking the third and final installment in Rachel Morgan’s Creepy Hollow series, The Faerie War will make readers feel as though they never left as Morgan’s tantalizing storyline and three dimensional characters steal hearts once again in this gripping conclusion!

Picking up where The Faerie Prince left off, The Faerie War lures readers back into Rachel Morgan’s masterful world of Creepy Hollow. After the shocking ending of the previous book that left yours truly gasping, and saw a friend become a villain as well as many unexpected revelations revealed, The Faerie War had a lot to live up to. Considering I was eagerly turning the pages on my Kindle as fast as possible, I’m thrilled to say it managed to hit the nail on the head!

The Faerie War, as with all the previous books in the series, progressed nicely. There’s a steady build to a thrilling and startling climax, but the in between parts of the story were never lacking either; there’s more than enough romance, humor and mystery to keep you entertained. The characters go on a real journey to save their world from the evil overlord that threatens their very way of life.

After the unexpected ending of The Faerie Prince that saw heroine Violet loose her memory, Violet is at times almost a different character during The Faerie War. And yet she’s so very Violet. She may have lost many aspects of her memory and may not remember her past, but the very things that make her Violet and make her that fantastic heroine to follow shine as she continues her journey to destroy Draven.

Ryn is back as Violets love interest and is as tantalizing as he’s always been. Considering The Faerie War is told in dual POV, the chance to see the world through Ryn’s eyes just made me love him more. Ryn has to fight for Vi like never before seeing as she doesn’t remember him, but the chemistry and connection between these two are as good as ever as they re-discover what they have.

From one danger and disaster to the next, The Faerie War really was a fantastic conclusion to the series. Honestly, I’m so very sad to see this series come to an end but feel like it couldn’t have been concluded better. Rachel Morgan has penned a self-published treasure with this series and if you haven’t read it yet, now’s the perfect chance!

Source: Sent for review by the author (Thank you Rachel!)
Format: Kindle ebook
Buy it: Amazon (Kindle) | Amazon(Paperback) | Smashwords | Barnes & Nobles
My Recommendation: Fans of Aprilynne Pike and well told faerie stories won't to miss this series!
Cover: I fits in perfectly with the previous two in the series
Will I read sequel/continue with series: Despite this being the last story in the Creepy Hollow series, I look forward to more fantastic reads by Rachel Morgan in the future!