I'm super excited to have the Aussie Blog Tour for The Rig stop by today! Thanks to Hot Key Books and Five Mile Press, author Joe Ducie talks with me about his debut novel and his interesting background in this oh, so fun interview 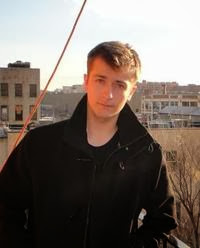 Hi Joe! Thanks for agreeing to chat with me today. I'm really excited about being a part of the blog tour for your debut novel The Rig and can't wait to talk to you.....

Let's jump straight in, shall we?

To begin with, I have to say congrats on the recent release of The Rig! I'm sure it must be a really exciting time for you right now. How does it feel knowing your story's actually out there and that people can read it?
Thank you. Having the story out and about in the world is the best kind of scary-good feeling. Two parts good to every part scary! Strange feeling, walking into a bookshop and seeing the book on the shelf. I’m firmly resisting the urge to hang around the shelf and make a not-so-subtle recommendation to any one that happens by…

For those who haven't had the chance to read it yet, The Rig is actually a really complex novel with so many different elements, especially main character Will Drake, who has a knack for escaping even the most heavily of guarded prisons. Seriously, there are so many great male leads, but Will is something else! Is he based on anyone you know?
Will Drake is based entirely on my good self and my misspent teenage years getting into all sorts of trouble. Can’t say I was ever sent to an oil rig prison, but I came close! Heh, I’m joking. If Drake is based on anyone in my life I’d have to say my brother. They both share that same can-do attitude that gets the job done, no matter how dangerous the job may be. Both Drake and my brother act where others wouldn’t, and that makes for an interesting character.

It's evident from the very beginning that The Rig is going to be one crazy, intricate story; especially seeing as possible escape may be in the works for the main characters during the book. How much effort went into making sure every detail was perfect?
I wrote the first draft of The Rig in a busy 11 days, but I’d been thinking on the story in my head for months, so when it came down to putting it on the page I blazed through the words. To be honest, a lot of the story revealed itself as I was writing. Making sure the details were right in the aftermath of those 11 days was a lesson in perseverance! I think half the battle in writing a novel is finishing the darn thing and fixing the details later. Well worth it, though. And I can’t thank the editors from Hot Key Books enough for polishing those details all the more.

I LOVE the cover for The Rig. I'm not trying to be superficial, but boy is it striking. Did you have any say in the cover's design?
Oh, I am most certainly in love with the cover. The cover was designed by a chap at Hot Key and evolved quite a bit from the first time I saw it back in March. Have to say, even those early concepts were fantastic so there were no complaints or suggestions from me! I was just along for the ride on that one.

Will certainly goes through a lot during his time on the Rig; it's a brutal place. How do you think you'd fair being in a place like that?
As admirably, if not more so! Heh, again, no, I’d probably just learn to keep my head down and off the radar of the insane guards. That said, I wouldn’t be averse to a bit of mischief if I could manage it.

A little birdy told me you have a degree in counterterrorism, security and intelligence, and have worked in some really incredible fields throughout your career; from border protection to personal security and now writing. How did you manage to make the incredible jump from there to writing? Is it just something you've always had a passion for?
Oh, that old degree gets me into all sorts of trouble. Writing is something that has played on my mind for years, and I did spend years crafting drafts and stories before anything was even close to being published. Put in the practice, so to speak. The last few years, I’ve kind of used the writing as a buffer between me and the security/counterterrorism world. A sort of fence and a chance to relax, wind down, and work on projects that are entirely unrelated to security and intelligence! That side of my life can be… grating. With any luck, if the writing side of my life continues on course I’ll be able to hand in my badge and my gun and walk away!

If you could meet anyone, dead or alive, real or fictional, who would you want to meet and why?
Wouldn’t mind meeting Churchill. That man saved civilization. On the fictional side of the fence, I’d have to say Peter Venkman from Ghostbusters, played, of course, by Bill Murray. I reckon we’d get along and also I want to be a Ghostbuster.

The Rig races to a really climactic ending, any hints to what we can expect from you in the future?
Just finished a draft for a sequel to The Rig, picking up pretty much from where The Rig leaves off. Also working on a few other projects, urban fantasy and contemporary horror/tragic comedy sort of vibe. Got a lot of ideas, a whole lot of ideas, but alas for the time to get them on a page. Thankfully, plenty of time between now and the future, so by the time I’m done I’ll be littering two or three entire shelves at the bookshops!

Thanks again for taking the time to answer my questions Joe--I certainly appreciate it. Best of luck in the future. If your debut novels anything to go by, I'm sure you have plenty of great stories up your sleeves!
Thanks for some great questions! Really enjoyed answering them.

Joe Ducie (1987-) is a writer from Perth, Western Australia. By day, he charges a toll to cross a bridge he doesn’t own. Yet by night, in a haze of scotch-fuelled insanity, he works tirelessly on an array of stories both short and long. Joe possesses a fierce love of a smooth finish. Under no circumstances should you ask him just what that means.

Joe was born in Barrow-in-Furness, Cumbria in November 1987, and currently resides in Perth, Western Australia. He is primarily an author of urban fantasy and science fiction aimed at young adults. His current stories include Distant Star, Upon Crystal Shores, Red vs. Blue, and The Forgetful Library.

Joe attended Edith Cowan University and graduated in 2010 with a Degree of Counterterrorism, Security and Intelligence. He went back, the idiot, and completed post-graduate studies in Security Science in 2011. Joe has also studied Creative and Professional Writing at Curtin University.

When not talking about himself in the third person, Joe enjoys devouring books at an absurdly disgusting rate and sampling fine scotch. 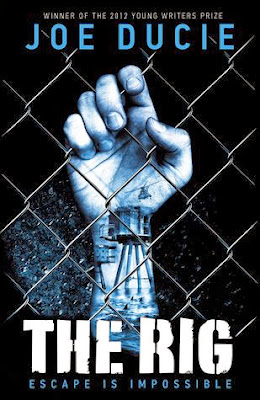 Fifteen-year-old Will Drake has made a career of breaking out from high-security prisons. His talents have landed him at The Rig, a specialist juvenile holding facility in the middle of the Arctic Ocean. No one can escape from The Rig. No one except for Drake...

After making some escape plans and meeting the first real friends of his life, Drake quickly realises that all is not as it seems on The Rig. The Warden is obsessed with the mysterious Crystal-X - a blue, glowing substance that appears to give superpowers to the teens exposed to it.
Drake, Tristan and Irene are banking on a bid for freedom - but can they survive long enough to make it?

Drake is an action hero to rival Jason Bourne and the CHERUB team in this debut author's fantastically imagined sci-­‐fi nightmare.


Be sure to follow the rest of the tour:

A special thanks goes to Sandra of Five Mile Press for organizing the tour and Joe Ducie for taking time out to be interviewed. The Rig is available now, online and in all good bookstores!