Book Shelf: The Darkest Craving (Lords of The Underworld, #10) by Gena Showater 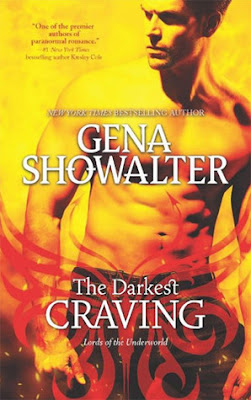 New York Times bestselling author Gena Showalter is back with a breathtaking Lords of the Underworld tale about a warrior trapped by darkness and the woman determined to save him.

Having endured weeks of torture in the bowels of hell, Kane wants nothing to do with his beautiful rescuer, Josephina Aisling. The half-Fae female threatens to awaken the demon of Disaster inside him—a beast he’s determined to kill, no matter the price.

Josephina is hunted by a brutal enemy—her royal family—and Kane is her only source of protection. He’s also the only male to ever set her aflame, and even he succumbs to the heat. But as they navigate the treacherous world of the Fae, they are forced to make a choice: live apart…or die together.

Kicking off the 10th installment in Gena Showalter’s ever incredible Lords of the Underworld series, The Darkest Craving features Kane, one of the demon possessed immortals, a tortured man and keeper of Disaster and the woman who finally manages to worm her way into his heart, finally bringing light into his otherwise difficult existence.

I am a massive Lords of the Underworld fan. Massive! Love, love, love this series. This is easily included in my top two or three PNR series ever. Hands down. Without a doubt. No contest. There’s something so alluring about this world and the characters that inhabit it and Gena Showalter’s talented ability to blend action with sizzling romance and humorous wit and sass never fails to ensnare me. Over the course of this series, I’ve come to care so deeply about the all characters as each of them fall in love and find happiness and the ability to re-visit them with each story only makes me love the series more!

Admittedly, I didn’t love The Darkest Craving as I did the previous book in the series or some of the earlier books, but it was still a fantastic read. Finally telling the keeper of Disaster, Kane’s story, Showalter continues her introduction of new characters to her already suburb lineup and sets the stage for future stories we’ve all been waiting on, including Cameo, Torin and William’s books.

I like Kane, I do. He’s a good guy and he’s been through a lot having helped rescue Legion and he was generally likable and easy to read about in The Darkest Craving. He’ll never be my favorite Lord, that spot is reserved for Torin and Lucian, but he’d still a good character. He’d faded into the background in a lot of the books, but in The Darkest Craving he finally has his moment to shine and shine he does. He’s a typical Lord through and through; fierce, brutal and self sacrificing—gotta love these boys!

I was actually surprised when we first meet Josephina at the beginning of The Darkest Craving. Sneaky Gena had us all thinking that Kane may be paired with a horseman (horsewoman) of the apocalypse, but that isn’t the case we soon discover. Again, I liked Josephina. She’ll never be one of my favorite heroines from this series, but she was still worth reading about. Showalter introduces us to a new side to her world as we meet Josephina’s Fae family and delve into her world. Snappy, sassy and quirky, Josephina is a sweetie.

I was a little bit disappointed with the connection and physical relationship of Kane and his “Tink” in this book. Don’t get me wrong there was nothing wrong with it really, but to me they were lacking the normal spark I’ve come to expect from Showalter couples. There was just something missing and it left me from really sinking my teeth into them as a couple.

What really has me excited are the beginnings Gena Showalter has set up for Torin and Cameo in The Darkest Craving. The prospect of a woman for Torin has me all keyed up and as for Cameo….Lazarus! Never saw that coming but boy am I excited. Can’t wait to see what Gena Showalter has up her sleeve next, but I’d bet my bottom dollar it’s going to be brilliant!

Source: I bought
Format: Paperback
Buy it: Bookworld | The Nile | The Book Depository | Amazon
My Recommendation: This is one of the best PNR series out there--a must read!
Cover: It fits in perfectly with the other covers in the series.
Will I read sequel/continue with series: YES! YES! YES!