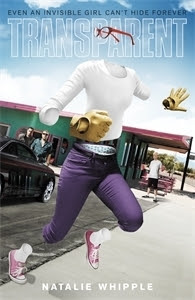 High school is hard when you're invisible.

Fiona McClean hates her family, has had to move to a new school and seems to be completely invisible to the boy she likes. So far so normal, right? But Fiona really is invisible. She doesn't even know what colour her own hair is.

Born into a world where Cold War anti-radiation pills have caused genetic mutations, Fiona is forced to work for her mind-controlling mobster father as the world's most effective thief. When her father announces she must become a murdering assassin, Fiona and her telekinetic mother make a break for freedom. Running to a small Arizonian town, Fiona finds that playing at 'normal life' with a mother on the edge, a brother she can't trust, and a boy who drives her crazy is as impossible as escaping her father.

Transparent by Natalie Whipplie is a delightfully addictive read that features a kick-ass heroine and a fabulous story that will entertain from start to finish!

I have to say....I really enjoyed this book!  I wasn't a hundred percent sure what to expect when going in, but I found it to have a perfectly paced plot and to be featuring writing that was never too over baring. Transparent is a really fun book to read. Natalie Whipple has introduced us to a really interesting world where a large percentage of the population have superpowers and special abilities and Mob like individuals and syndicates rule the society to an extent.

Considering the fact that our main character is basically on the run, Transparent really does features a great heroine, while also having a fantastic cast of minor characters to support the story. They were all likable and relevant in their own way and just added that little something extra to the story in terms of character dynamic. There's a lot at stake for our main character, but this book is also very quirky and fun, with just the right amount of romance and teenage drama to tick all your boxes.

Our heroine in Transparent is Fiona. A syndicate baby who also happens to be invisible....and on the run from her father! I really liked Fiona. There wasn't a single moment in the book where this wasn't the case. Her voice was really easy to follow throughout the story and she had a great personality. Whipple wrote her perfectly making sure she was sassy and brave in her own way, but also had the right amount of vulnerability in her character. Basically, I just loved Fiona and thought she was a great character to follow in this book.

I also really enjoyed the relationship and friendships Fiona develops with Bea, Seth and Brady. Bea and Brady were great new friends to Fiona and while she and Seth may have gotten off to a rocky start, their relationship developed steadily over time in a direction I admit I was expecting but enjoyed reading about none-the-less. They're sweet and endearing and endlessly enjoyable to read about!

As I mentioned, Transparent is perfectly paced, but I'm at a mixed mind when it comes to the ending. It was very exciting and fitting all things considered, but I also felt as though it seemed rushed and came out of nowhere, but that could also have something to do with the fact that I really wasn't ready to say goodbye to the story and the characters--I was having too much fun!

If your a fan of a good action romp or love your characters brave with some superpowers thrown in, Transparent really is the book for you! Or if you're not, then I still recommend adding it to your TBR pile at some point, because it really is too much fun to miss out on!

Source: Sent for review by Hot Key Books (Thank you Sandra!)
Format: Paperback
Buy it: Booktopia | The Nile | The Book Depository | Amazon
My Recommendation: Love superheroes? This book is for you?
Cover: I really, really like this cover. When you see the physical copy, you realize a picture just doesn't do it justice!
Will I read sequel/continue with series: Even though this is a stand alone, I wouldn't be against reading my by Natalie Whipple in the future.....