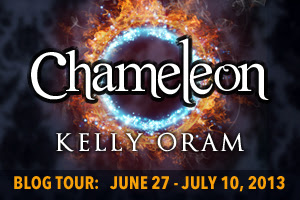 Today the Chameleon by Kelly Oram blog tour stops at The Rest Is Still Unwritten!

Since reading V is for Virgin and The Avery Shaw Experiment, I've becoming quite a fan of Kelly Oram. Her books are fun and quirky and so brilliantly written. As Kelly makes the jump from contemporary writing with a dash of sci-fi on the side into straight fantasy/paranormal with Chameleon, the fabulous lady herself is here to share her leap into this whole new genre! 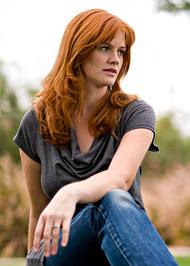 I completely understand why so many writers pick one genre and stay there. Each story genre from suspense to sci-fi to romance to fantasy has its own flavor. They all have their own set of rules and clichés. As a writer, you really have to know and understand your genre in order to write a great book. This is not easy. It takes time, research, and a certain love—a real passion—for whatever specific genre you chose to write in.

Personally, I simply cannot stick to one genre. (As a reader and a writer.) I love too many of them way too much, and get bored when I stay with one genre for too long. I have always had a love for paranormal and fantasy books, but it took me a long time to build up the courage to write it myself.

I started out as a contemporary writer, and then took my first shot at something new with my comic-book-esque novel Being Jamie Baker. Jamie turned out to be a great transition novel. It has a lot of contemporary elements to it but also takes that first step into make-believe. It gave me my first taste of bending the real-world rules. I immediately grew a major thirst for it, but knew I had a lot to learn before I delved fully into the world of fantasy.

Contemporary fiction and fantasy are two entirely different beasts. There were two major differences that posed as challenges to me. The first was the difference in story lines. Contemporary works tend to be more character driven. Plots often revolve around a romance, or overcoming emotional obstacles. Your main character is often trying to defeat their inner demons, whereas with fantasy most of the time the demons are the literal kind.

Fantasy plots are usually more action driven. You have a villain to defeat, a mystery to solve, an adventure to go on. This doesn’t come as naturally to me as a plot that revolves around a characters dealing with emotions or falling in love. The more involved plot took much more planning. My outlines had to be a lot more detailed, and I had a lot more rewrites because I’d find plot holes or I’d back myself into a corner and have to find another way to make something work. I actually learned a lot while doing this and had a great time with it. I’ve always been a bit of an outliner, but now I think it’s safe to say I’m a bit obsessive about it.

The other main difference I noticed was in the description. When dealing with fantasy, suddenly you have to explain a lot more. You really have to be a lot more visual. You can’t just quickly describe your character’s sexiness and give a brief paragraph about the beach house they’re spending the summer at or whatever. You have to build an entire world for your reader that they’ve never seen before. You have to describe creatures that don’t really exist. You have to explain all of the lore and set up a whole new set of rules for people to understand. All of these new things are not something your reader will automatically relate to. If you can’t help them visualize it, they will never be able to get sucked into your story the way you want them too.

Personally, as a writer my strengths lie in character interaction and dialog. Description and action are a challenge for me. I loved being able to tackle my weaknesses and watch my writing improve, but it took a lot of time, effort and practice before I felt I was ready to write something I could share with people. (I have a few fantasy stories that will never leave my hard drive because they suck oh so badly!)

The good news is that so much blood, sweat and tears (and hair loss!) went into this manuscript that I grew a special love for it. Everything felt new and exciting, and made it easy for me to want to work my hardest to make Chameleon the best book I could write. I’m very proud of it, and it will always have a special place in my heart.

Hopefully I’ve succeeded in my genre jump. Hopefully this book will feel like something new and refreshing compared to my previous books, and I hope my contemporary fans will give it a chance because I developed a brand new passion. I’m sure I will always have a good contemporary novel in the works, but I plan to write many more fantasy books in the future.

Kelly Oram wrote her first novel at age fifteen–a fan fiction about her favorite music group, The Backstreet Boys, for which family and friends still tease her. She's obsessed with reading, talks way too much, and loves to eat frosting by the spoonful. She lives outside of Phoenix, Arizona with her husband and four children. 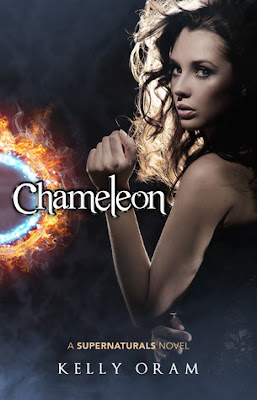 For small-town rebel Dani Webber magic and monsters are no more real than the Easter Bunny… until the day she accidentally stops time. Dani quickly discovers that not only do supernaturals exist, but she herself is one of them. This is great news for her life-long best friend Russ, who can finally come clean about his own supernatural status and his undying love for her. Before the two can start to enjoy the long overdue relationship, Dani is taken by a powerful council of supernaturals who believe she is the Chosen One destined to save them from extinction.

As if being kidnapped and expected to save the world isn’t bad enough, an ancient prophecy warns of the Chosen One’s dark nature: “Only the truest love will keep her an agent for good.” The council believes they know who this “true love” is and, unfortunately, that person isn’t Russ. The mysterious, powerful and devastatingly handsome Seer is the last person Dani wants in her life, but when she starts having visions of a horrific future, she has no one else to turn to for help. Soon Dani finds herself torn between two very different boys with two very different opinions of whom she can trust. With the visions getting worse and time running out, Dani is forced to put aside her feelings and work with both the Seer and Russ before an ancient evil is unleashed upon the earth.


Add Chameleon on Goodreads or buy it at Amazon!