Book Shelf: Because of Low (Sea Breeze #2) by Abbi Glines 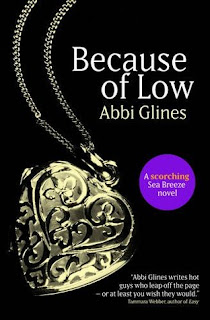 Set in the steamy coastal Alabama town of Sea Breeze, an interconnected group of older teens hook up, break up ...and much, much more. Marcus Hardy had hoped to enjoy a year away at college while he put the summer he'd rather forget behind him. But instead, he's jerked right back his home town of Sea Breeze due to a family crisis. The only bright spot to returning is the hot redhead who sleeps over at his place several times a week. There's just one thing though - she's sleeping in bed with his new roommate, Cage York.

Willow "Low" Foster needs a place to live. Running to her best friend Cage's apartment every time her sister kicks her out isn't exactly a long term solution. But Cage has a new roommate and suddenly sleeping over at his apartment isn't such a bad thing. Not when she gets to see those sexy green eyes of Marcus's twinkle when he smiles at her like he wants her there. There's one problem though, Cage is under the disillusion that when he's through sowing his wild oats, he's going to marry Low - an assumption Marcus intends to change. But when his carefully laid plans come crashing down with a revelation he never expected, Marcus will have to choose between Low or his family. Because once the truth comes out ...there's no other choice.

Because of Low is a fun, sensual tale by Abbi Glines that really will have you rapidly turning the pages, yet at the same time, desperately hoping the story isn't about to end!

From start to finish, Because of Low really is a great read. While this isn't actually the first book in Glines's Sea Breeze series, this is this first one I have read, although I definitely know it won't be the last! Chronologically, Because of Low takes place after the first book in the series, Breathe, and considering I'm yet to read Breathe, I must point out that you don't necessarily need to have read Breathe to pick this novel up....it can quite easily be read on it's own, or as part of the rest of the series.

In Because of Low, Abbi Glines introduces us to Willow "Low" Foster, a sweet, vulnerable girl who's had a tough run in life as well as Marcus Hardy, who's own family is falling apart and who was also the unlucky love interest in Breathe, although he's the leading man this time around.

Told in dual POV, this book tells the story of Low and Marcus as they connect with each other amidst their joint trust issues and family drama, seeing them ultimately fall in love. Considering that Because of Low is a fairly short book (I read it in two sittings), the relationship between Low and Marcus does come on strongly, and their love for one another fast, however it was easy to overlook this fact as Glines creates such a great dynamic between the characters in the story.

It was nice seeing this story unfold. The plot is admittedly simple, but in this case the saying less is more really does fit as the simple story is easily addictive to read about. Abbi Glines has done a great job with her flawed, yet very likable characters. There are a number of great characters that litter the pages of Because of Low and as she explores the relationship between Low and Marcus, Glines also allows us to read about the relationships between Low and Cage as well as Low and her niece Larissa, which I found both to be interesting for very different reasons.

I found I liked both Low and Marcus very much. I admit, I had a few problems with Lows character at times, especially towards the end of the book, but for the most part, I really enjoyed these two. Both together, and as individuals. Together, they have a really sweet chemistry that coats the pages. By herself Low has a lot of fears and a few problems, but she's a really nice girl and someone you can easily like for the most part. As for Marcus, he's a typical guy. This golden boy makes mistakes and makes the wrong choices, but he does care for Low and dearly loves his family.

As Glines weaves together Marcus's and Low's lives, there are a few interesting twists throughout the story that make it so much juicer. This book really showcases how human we can all be; we all have fears and we all make mistakes. That's part of life and we have to forgive and move on. Glines makes this abundantly clear where Low and Marcus are concerned and as their story ends, I find myself very eager for Cage's.

Glines has definitely made a fan in me, and I'll be on the lookout terrific tales from her in the future!

Source: Sent for review by Simon & Schuster (Thank you so much Anabel!)
Format: Paperback
Buy it: Booktopia | The Nile | The Book Depository | Amazon
My Recommendation: NA Fans will soak up this book without a doubt!
Cover: Beautiful. It's simple, but beautiful.
Will I read sequel/continue with series: Oh, absolutely!