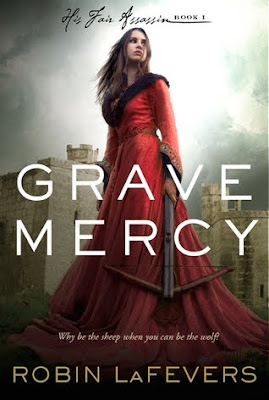 Grave Mercy by Robin LaFevers
Released on: April 3rd 2012
Add it: On Goodreads.

Why be the sheep, when you can be the wolf?

Seventeen-year-old Ismae escapes from the brutality of an arranged marriage into the sanctuary of the convent of St. Mortain, where the sisters still serve the gods of old. Here she learns that the god of Death Himself has blessed her with dangerous gifts—and a violent destiny. If she chooses to stay at the convent, she will be trained as an assassin and serve as a handmaiden to Death. To claim her new life, she must destroy the lives of others.

Ismae’s most important assignment takes her straight into the high court of Brittany—where she finds herself woefully under prepared—not only for the deadly games of intrigue and treason, but for the impossible choices she must make. For how can she deliver Death’s vengeance upon a target who, against her will, has stolen her heart?

Thoughts:
I'm yet to read a book by this author, however this one's been floating around the blogosphere for a while now and I love the sound of it. Ismae's story sounds like one that features a kick ass heroine in an awesome setting and add in some deadly games of intrigue and treason and a possible romance and you got yourself a great story!

What are you waiting on this week?