Welcome to my stop on the Cold Blood Blog Tour!
Cold Blood is the second book in the Dirty Blood series by Heather Hildenbrand and is, if I do say so myself, even better than the first book!

Today I have the pleasure of offering you an except from the book and one follower will win an ecopy of Cold Blood in their choice of format, but first, please head over and check out my review of Cold Blood here! 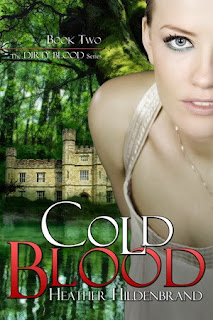 Wood Point Academy is not at all what I expected. For one thing, it looks like a cross between military school and Buckingham Palace. Everyone stares, the floors shine so bright you can see your reflection in them from a mile away, and no one smiles. Unless they're kicking your butt in the process. Which happens more often than not for the freshman. Lucky for them, my presence has just stolen the spotlight, and they get a break from the daily joys of hazing. At least I've got plenty to take my mind off the fact that my psycho cousin, Miles De'Luca, keeps calling and declaring his love and promising to come for me just as soon as he's destroyed anyone standing in our way. Wes isn't going to like that idea. So between Miles, Wood Point's evil welcoming committee, and the drill sergeant hottie trainer from hell, I just keep asking myself, how did I end up here?

Professor Flaherty turned to me with a knowing look. “Not what you expected for a combat teacher am I right?”

For a second I thought she was talking about Alex and I didn’t know what to say, but then I realized she was gesturing to herself. “Oh, no, I guess not,” I admitted.

She smiled wider, which lit her face and hair, making it all seem to glow. It helped soften the sharp glint that she wore in her eyes. “Then again, if we’re being honest, you’re not what I pictured either, for the daughter of a legend.”

Professor Flaherty twisted and her hand shot out, grabbing the object out of the air just before it made impact against her skull. She held it up and frowned. It was a rock the size of my fist. Her smile disappeared, replaced by a scowl that intimidated me far more than any other teacher I’d ever had, and turned back to the rest of the class.

“Who did this?” she snapped.

“Sorry Professor Flaherty. I was aiming for Justin,” called a male voice from a few rows back. I caught a glimpse of a jock-looking guy with messy brown hair, smiling apologetically.

She stepped further into the room, motioning for me to join her, and set the rock on her desk, the incident already forgotten. I stared, trying to understand how almost getting your skull bashed in was no big deal.

“Class, this is Tara Godfrey,” Professor Flaherty said, placing a small hand on my shoulder. “She’s new here, and I expect every single one of you to treat her like you would anyone else.”

Quiet snickers and mumbled words followed as I shuffled to my seat. A foot shot out a few rows in, and I barely missed face-planting in the aisle as I stumbled and slid into the empty desk. I got another round of snickers and laughter. If Professor Flaherty noticed, she didn’t comment. I glared at the kids around me until they looked away.

Up front, Professor Flaherty gathered papers and files while she talked. “We’ll be working outside today, so go ahead and assemble on the lawn. I’ll meet you out there in a couple of minutes.”

Smiles appeared and a couple of whoops went up around the room as kids jumped up and began filing out a side door. I took a step in that direction, but Professor Flaherty’s voice stopped me. She was bent over her desk, rummaging through its drawers as if she’d lost something.

“Tara, hang on, and I’ll walk with you,” she said without looking up.

“Oh, I’ll walk her, Professor Flaherty.” A boy hung back in the doorway, a baseball cap pulled low over his eyes. He wore old jeans – not ratty, but worn and comfortable, and a shirt that said something about the 17th annual science fair scrawled on it. His backpack was filled to overflowing and looked like it weighed more than he did.

“Mr. Sandefur,” Professor Flaherty said, barely glancing over before going back to her search. "That’s fine. I’ll be there in a minute.”

To find out where you can read the next installment of Cold Blood, please visit http://www.heatherhildenbrand.blogspot.com/

Giveaway!
Today Heather has so kindly offered one of my followers an ecopy of Cold Blood in their choice of format! The giveaway will run for the rest of the tour (until the 25th of December) after which I'll pick a winner. ANYONE can enter and all you have to do is simply comment below with a way to contact you :)


I just want to say a BIG THANK-YOU to Heather for inviting me to be a part of the tour--it's been a blast and I can't wait until the next book!
Thank-you all for stopping by and don't forget to stop by the next stop on the tour tomorrow at Bookerella Reviews!