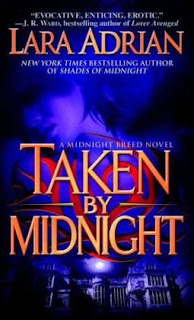 AT THE CROSSROADS OF DEATH AND DESIRE, A WOMAN TASTES A PLEASURE NO MORTAL IS MEANT TO SURVIVE.

In the frozen Alaskan wilderness, former state trooper Jenna Darrow survives an unspeakable breach of body and soul. But with her narrow escape comes an even greater challenge. For strange changes are taking place within her, as she struggles to understand—and control—a new hunger. To do so, she will seek shelter in the Boston compound of the Order, an ancient race of vampire warriors whose very existence is shrouded in mystery. Perhaps the most mysterious of them all is Brock, a brooding, dark-eyed alpha male whose hands hold the power to comfort, heal . . . and arouse.

As she recovers under Brock’s care, Jenna finds herself drawn to the Order’s mission: to stop a ruthless enemy and its army of assassins from subjecting Earth to a reign of terror. Yet in spite of their resolve, a purely physical relationship without strings soon binds Brock and Jenna together with a desire fiercer than life and stronger than death itself—until a secret from Brock’s past and Jenna’s own mortality challenges their forbidden love to the ultimate trial by fire.

This tale has been another great story in the breed series. After the events and implications of Kade and Alex’s story, I was very excited for this one. We first got to know Jenna and Brock a little in Shades of Midnight and it was exciting seeing what happened to them in the weeks following Jenna’s attack. I was glued to this book the entire time I was reading it; the plotline was effected by the events of the previous book and Brock and Jenna facing changes to her thanks to the involvement of the Ancient.

Brock was another great male lead, typical of a Breed warrior and enjoyable to read about. I liked him and found him to be strong and brave. I admit there isn’t anything about him that I haven’t seen before, but that didn’t mean I liked him any less.
Jenna on the other hand, I felt, was completely unique to this series. Unlike the other heroine’s of the series, she wasn’t a Breedmate, which meant her relationship with Brock was unique and nothing liked we’d seen before. Jenna had faced horrible tragedy in her past and with the effects of her encounter with the Ancient affecting her and what she was, she was certainly interesting to read about. I really felt for her. She was proud and put on a strong front, but she was very vulnerable in side and sad. With all the changes she was going through, she was in so much pain and really needed Brock.

I thoroughly enjoyed the relationship between Brock and Jenna. As I mentioned earlier, they really are different from the other couples of the series. Jenna is the first human to steal a warrior’s heart and as I was reading I did wonder how things would turn out for them. Their relationship grew hard and fast, but the connection they’d forged from the previous book helped form a great foundation for their relationship and because of this it never seemed too rushed or forced. They were hot and steamy together and were great for one another. Brock helped heal Jenna and she showed him love he’d never known. I loved that it didn’t matter to him that she wasn’t a Breedmate and that he considered her his even without that blood connection and bond.

My only issue with this book was that the ending seemed very rushed to me. It was all exciting when the imprisoned Breedmates were found, but after this everything seemed to wrap up very quickly. I understand that Brock and Jenna are going to be together, but I still had some questions about how exactly they planned to make it work and what that would entail. I would have liked a bit more explanation and more closure from Lara Adrian, but I was still pleased with this book regardless.
Brock’s history with Corinne was something I wasn’t expecting and I am looking forward to the next book featuring her and Hunter. Hunter certainly is one of a kind and with everything she’s been through I know their book is going to be anything other than easy. Looking forward to it.