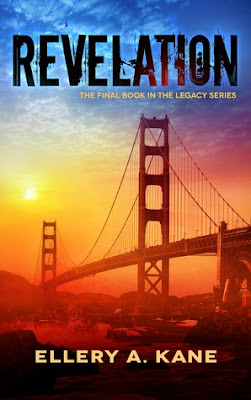 Lex Knightley is keeping count. It's been seventy-five days since Quin left for Los Angeles. Seventy-five days without one word from him. Sixty-one since she made a deal with a devil. A deal she already regrets. And exactly thirty-nine days since Onyx-the deadliest emotion-altering medication yet-hit the streets, leaving an escalating body count in its wake.

With Zenigenic promising a new drug-an anti-Onyx to make the world a little kinder and a lot more compliant-it seems Xander Steele will stop at nothing to satisfy his desire for power and control. Quin's dramatic return brings more questions than answers. Lex suddenly finds herself right in the middle of it all . . . on a run for her life.

It's a race against the clock to uncover Steele's diabolical plan as the fate of San Francisco hangs in the balance. Can Lex finally fulfill her mother's ambition to expose Zenigenic-or is it already too late?

Caution: Emotion-altering medications are in the air. Find a mask. Hold your breath. Get ready for Revelation, the page-turning conclusion to the Legacy trilogy.

Revelation is the third and final novel in the Legacy Trilogy by Ellery A. Kane, concluding what has been an easy and enjoyable dystopian style series in wonderful fashion.

Lex Knightly has been to hell and back trying to expose Zenigenic for the deceptive company it is. Alongside her father and a close group of friends, Lex has lost loved ones and friends, and is determined to help uncover any evidence that might prove Zenigenic and its founder Xander Steele are up to no good as they prepare to release a new wonder drug. It’s been months since Lex saw Quin, but when an attempt on Steele’s life puts Quin in the spotlight, Lex soon finds herself in the middle of things once again. On the run for her life but still hoping to fulfil her mother’s legacy, Lex and her friends prepare to make one final stand against Zenigenic that will either see them finally win, or be lost forever……

This series has been one I’ve very much enjoyed reading. I can’t fault any of the books—they’re just good solid entertainment. Ellery A. Kane has created a vivid future world where drugs capable of manipulating your emotions are all the rage and cause dangerous side effects to those using them. As the daughter of the scientist behind the creation of many of these drugs, our main character Lex has been on a mission to help right the wrongs of her remorseful mother throughout the series, with danger, romance and plenty of twists never far behind. Ellery A. Kane has managed to pack a lot into three books with the storyline continually developing and changing during the trilogy.

I’ve enjoyed following Lex throughout the trilogy and feel she has been a strong protagonist. I loved her relationship with Quin and am glad to see that Ellery A. Kane finally gives her characters a lot of resolution, even if their futures are left uncertain but hopeful.

Fast paced and perfect for fans of the Article 5 series by Kristen Simmons, Revelation concludes Ellery A. Kane’s debut series and leaves this reader superbly satisfied with how everything ended!

Source: Sent for review by the author (Thank you Ellery!)
Format: Paperback
Buy it: Amazon | Barnes & Noble
My Recommendation: Perfect for fans Article 5 series by Kristen Simmons
Cover: This cover is really colourful and goes perfect with the rest of the trilogy.
Will I read sequel/continue with series: This is the final book but I look forward to reading whatever Ellery A. Kane releases next!