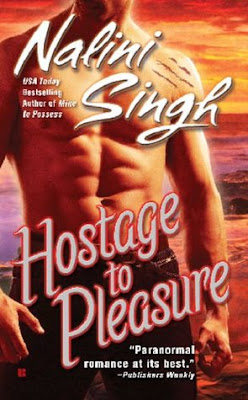 Separated from her son and forced to create a neural implant that will mean the effective enslavement of her psychically gifted race, Ashaya Aleine is the perfect Psy--cool, calm, emotionless...at least on the surface. Inside, she's fighting a desperate battle to save her son and escape the vicious cold of the PsyNet. Yet when escape comes, it leads not to safety, but to the lethal danger of a sniper's embrace.

DarkRiver sniper Dorian Christensen lost his sister to a Psy killer. Though he lacks the changeling ability to shift into animal form, his leopard lives within. And that leopard's rage at the brutal loss is a clawing darkness that hungers for vengeance. Falling for a Psy has never been on Dorian's agenda. But charged with protecting Ashaya and her son, he discovers that passion has a way of changing the rules...

Hostage to Pleasure is the fifth instalment in Nalini Singh’s thrilling Psy-Changeling series and is another fast paced, sensual and richly entertaining romance that will excite readers from beginning to end!

Dorian Christiensen is a lethal DarkRiver sniper known for his charm and ferocity despite his inability to change into his leopard form. Damaged by the loss of his sister Kylie who was murdered by a Psy killer, Dorian struggles to move on, but finds his strength and anger tested by a beautiful Psy who ignites his inner fire. Ashaya Aleine is the perfect Psy—calm, emotionless and logical—at least on the surface. What no one knows is that this intelligent scientist is in the middle of a desperate battle to save her son and escape from the individuals who hold both he and her hostage. Taking a chance to trust Dorian and his DarkRiver pack mates may be the only option Ashaya has, but neither she nor Dorian are prepared for the attraction that simmers between them and the power it holds…..

Hostage to Pleasure was another wonderful Psy-Changeling book. Nalini Singh kept me on my toes with its forward moving storyline, fantastic characters and sizzling romance. I’d been excited to read Dorian’s story since we first met him and Singh did not disappoint with a great romance and a worthy mate for Dorian.

In a lot of ways Hostage to Pleasure wasn’t at all what I was expecting. Ashaya’s relationship with her son was a lot more complex than I initially thought and I have to commend Singh for the twists she threw in where this is concerned—it was brilliantly done. Keenan was an absolute sweetie and the fierce dedication Ashaya had for her son and the love she felt for him despite her Psy conditioning was beautiful.

Dorian and Ashaya had a wonderful connection and I very much enjoyed their romance. Due to his past loss, Dorian feels a lot of hate towards the Psy and as such Ashaya makes for an interesting partner for Dorian. He has to overcome a lot of his pain and Nalini Singh explores the journey between these two individuals wonderfully.

Engrossing and addictive, Hostage to Pleasure was another Psy-Changeling novel that I didn’t want to put down. Nalini Singh continues to surprise and satisfy and I’m ready to dive straight into the next novel featuring Mercy and Riley!

Source: I purchased from The Book Depository
Format: Paperback
Buy it: Bookworld | The Nile | The Book Depository | Amazon
My Recommendation: A must read PNR series
Cover: Has the same look and feel to the rest of the series.
Will I read sequel/continue with series: Hell to the yes!