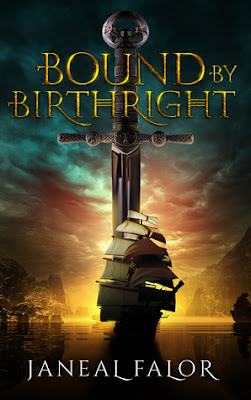 Elven princess Arabella is set to marry the human Prince Phillip but her countrymen do not hesitate to express their anger with her parents' attempt to improve relations with the humans. With death threats plaguing her, Arabella is forced into hiding.

When her sanctuary is usurped by pirates, Arabella goes on the run with humans who vow to help and keep her safe. She finds herself drawn to one of the humans, the dashing Robert, who steals her heart.

Arabella would like nothing more than time to get to know Robert better, but with pirates attacking and her wedding date approaching, time is one thing she doesn't have. Arabella's on a flight for her life and must reconcile with the truth—she can never be with the one she wants.

If only her heart would agree.

Bound by Birthright is Janeal Falor’s latest release and is a fantastically told adventure that is packed with danger and romance and is riddled with magic, pirates and dashing suitors.

For decades the elves and the humans have been at odds with one another; relations between their two people bad at best. To unite the two races and bring about peace, Elven princess Arabella is promised in marriage to human prince Phillip. Yet on the eve of her wedding, the growing unrest between her people forces Arabella and a trusted group of protectors to flee her castle home and go into hiding in order to protect her life from those who see the betrothal as the ultimate betrayal. When her refuge is invaded by deadly pirates, Arabella finds herself going on the run with humans who promise to keep her safe, including the charming Robert who ignites a want in Arabella like never before. But as the danger increases and with lives on the line, Arabella must not only fight for her life, but decide just how far she’s willing to go to protect her people; even if it’s at the expense of her own heart…….

As a fan of Janeal Falor’s previous work, I was really excited to read Bound by Birthright and utterly thrilled that Janeal Falor did not disappoint! I really, really loved this book! With the premise sounding promising, I had high hopes for Bound by Birthright and quickly found myself devouring the novel. Bound by Birthright was a well written, well-paced fantasy featuring a highly likable leading lady and the kind of romance I absolutely love. A fantasy tale through and through, there’s pirates, elves, magic and forbidden romance all woven into a fast paced and exciting tale.

Supported by a great cast of characters, Bound by Birthright is told through the eyes of the elven princess Arabella. Arabella was a true fantasy heroine and someone I liked very much. Having lived the life of a princess, Arabella is understandably soft in a lot of ways, but has a strong fire inside her. She genuinely wants to help her people, doesn’t put herself first and is quick to offer help to those around her. Really, she doesn’t have a mean bone in her body; even as she begins to fall for a man she knows she can never be with. Arabella still wants to do the right thing by her people, even at her own cost. She’s smart and capable and grows throughout the novel.

Nothing seems to go as planned for our characters and I loved the twist after twist Janeal Falor wrote into the story. There was plenty of excitement to be found within this story. Fantastic action scenes, electric chemistry and budding friendships added to my enjoyment and I easily became swept up in the growing romance between Arabella and Robert that wasn’t over baring and was rather the icing on the cake with a fantastic book.

Racing towards an incredible cliffhanger ending that will leave you trying to turn pages in the hopes that there’s more of this delectable tale to read, Bound by Birthright is a brilliant start to Janeal Falor’s Elven Princess series and is something that I highly recommend for this to love well told, exciting and enjoyable fantasy!

Source: Sent for review by the author (Thank you Janeal!)
Format: Kindle ebook
Buy it: Amazon | Barnes & Noble | Kobo | iTunes | Createspace
My Recommendation: This book is an incredibly addictive fantasy series--those who love fantasy will devour it.
Cover: The cover is fabulous and perfect with the rest of the series.
Will I read sequel/continue with series: Yes!