Book Shelf: Mine to Possess (Psy-Changeling #4) by Nalini Singh 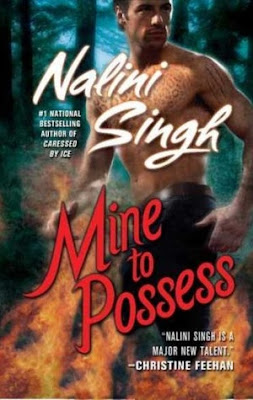 Clay Bennett is a powerful DarkRiver sentinel, but he grew up in the slums with his human mother, never knowing his changeling father. As a young boy without the bonds of Pack, he tried to stifle his animal nature. He failed...and committed the most extreme act of violence, killing a man and losing his best friend, Talin, in the bloody aftermath. Everything good in him died the day he was told that she, too, was dead.

Talin McKade barely survived a childhood drenched in bloodshed and terror. Now a new nightmare is stalking her life--the street children she works to protect are disappearing and turning up dead. Determined to keep them safe, she unlocks the darkest secret in her heart and returns to ask the help of the strongest man she knows...

Clay lost Talin once. He will not let her go again, his hunger to possess her, a clawing need born of the leopard within. As they race to save the innocent, Clay and Talin must face the violent truths of their past...or lose everything that ever mattered.

Mine to Posess is another riveting, sensual and deeply entertaining Psy-Changeling novel by Nalini Singh that continues to entertain and ensnare readers with it's romance, chemistry and engaging storyline.

Clay Bennett is a ferocious DarkRiver sentential, known for his loner behavior and his dark past. Having grown up never knowing his changeling father, Clay spent his younger years unable to fully comprehend and control his animal nature. Though he is now secure in his position in the Pack, Clay has never forgotten his childhood best friend and the only person he ever truly loved. Talin McKade had the most heinous things done to her as a child; her innocence stolen and her faith in people almost destroyed. Her fear saw her betray the boy who cared for and protected her like no other and though she fears what having him in her life again could mean, when street children begin being murdered, Talin turns to the one person she knows will help....Clay. Clay and Talin shared a fierce bond as children until one violent night changed things forever. Can they move on from their horrid pasts, or will they loose the fire that burns between them forever?

All I can think after reading this novel, is that Nalini Singh has done it again! She really has. I went into Mine to Possess not wholly convinced of how much I liked the male lead, but like Vaughn and Visions of Heat, Singh managed to make a Clay fan out of me with this novel that I very much enjoyed.

Told through Clay and Talin's varying POV's, Mine to Possess was fast paced and featured a thrilling storyline. Clay and Talin came to life so beautifully and Singh managed to pack a lot into the novel. Romance, friendship, sensuality---it was all there mixed with danger, humor and the power of family.

Tamlin was a strong but deeply fractured heroine who had suffered a childhood no child should have to endure. Though I admit there were times where I wanted to shake her for mistaking the obvious and for feeling the way she did, it was genuinely hard not to want to see Tamlin heal. She had her innocence taken by someone who should have protected her and in turn her life was a series of bad decisions and painful regrets. Yet she was a balm to Clay and he managed to help her forgive herself.

Nalini Singh created a powerful and almost sad pairing in Clay and Tamlin; two people who had shared a bond since childhood and who meant so much to each other. Clay came alive in this book for me thanks to the love he had for Tamlin that burned so deep and true and which helped him find peace and happiness too.

As with all the books in the series so far, all the character's I'd previously loved were back, as well as some new ones who seem promising. Max, Dev and Ashaya all appear to have potential and with Dorian and Ashaya's story having been it set up so nicely I'm very much ready to read their book next!

Source: I bought from The Book Depository
Format: Paperback
Buy it: Bookworld | The Nile | The Book Depository | Amazon
My Recommendation: Don't miss this series.
Cover: Very fitting for the male lead.
Will I read sequel/continue with series: Yes!

Email ThisBlogThis!Share to TwitterShare to FacebookShare to Pinterest
Labels: Book Shelf, I Bought