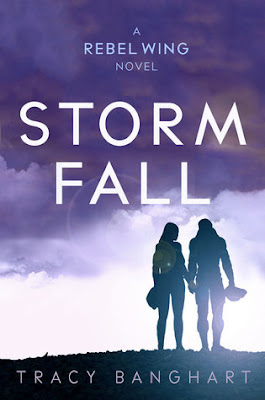 In the action-packed sequel to Rebel Wing, Aris battles for life and love . . . and not everyone will survive.

Aris Haan gave up everything to join the Atalantan Military: her family, her boyfriend, even her identity. In the end, though, it didn’t matter that she was a war hero. When the all-male Military discovered that she was actually a woman, she was sent home and erased from history.

Now she has a chance to go back to the battlefield—as herself. But as hard as it was to be a soldier in disguise, it’s even more difficult now. The men in her unit undermine her at every turn. The Safaran army has spies everywhere, perhaps even on Aris’s stationpoint. And she’s falling for her mysterious superior officer, Milek. But their relationship is forbidden, just stolen moments between training sessions and missions. There’s no room for love in war.

Then Aris discovers that Safara’s leaders have set their sights on her, Atalanta’s hero. And she must find them before they find her . . .

Storm Fall is the second novel in Tracy Banghart’s Rebel Wing series and is a beyond sensational follow up to the first book, filled with exhilarating action, sensual romance and thrilling danger!

Aris Haan’s whole life changed forever when she disguised herself as a man and joined the Atalantan Military. She left her family and the village where she lived to follow the man she thought she wanted to spend her life with. She became a fighter, a flyer and a war hero; saving the life of Ward Vadim from a dangerous enemy. Yet none of those things protected her when the all-male military discovered she was a woman. Now Aris has she chance to return to the fight against Safara thanks to having friends in high places who are determined to pave the way for women in military. Jumping back into her wingjet and fighting for her country sees Aris pushed to her limits, navigating a forbidden new relationship with her commanding officer Milek and trying to save the innocent people affected by war……

I read the first novel in this series, Rebel Wing in 2014 when it was initially published under the name Shattered Veil. This was before the series received new covers and new titles but I remember absolutely adoring the first book. It blew me away. And now having finished the sequel, I can’t for the life of me think why I’ve waiting so long to read this book. Storm Fall was brilliant—an absolutely worthy follow up that continued to thrill from the very first chapter and has me even more in love with the characters than I was before.

Tracy Banghart continually impressed me with her world building and storytelling abilities in Storm Fall. Not to mention her character development that is simply superb. Complimenting a story well told and perfectly paced, every single character within this series is complex and three-dimensional. They’re vivid and full of life and bring so much to the story. From our main character Aris to her comrades and commanding officers—Banghart gives them really depth and personality.

Considering this is only the second book, I can’t believe how far main character Aris has come since the very first time we met her. Though she always had an inner fire, gone is the shy, crippled girl whose vision for her future centered around one man. Aris has become a strong, capable solider who doesn’t need to rely on anyone to look after her. In Rebel Wing, Aris has to fight for her right to be in the military now that everyone knows she’s a woman. She encounters male soldiers who undermine her and treat her with no respect; refusing to accept a woman capable of defending herself and fighting for her country. I thought Aris handled everything in stride and never let them get to her. What can I say? I love this girl!! She’s an incredible character to follow.

And if I love Aris I absolutely adore, admire, and am obsessed with Milek. There’s so much beauty in Aris and Milek’s relationship. I cannot fault how Tracy Banghart has written and developed their romance. Sizzling chemistry and tension aside, Milek supports Aris in everything she does and everything she is. He appreciates her strength and loves her for who she is; never asking her to change and understanding when she has to do her job. They both adore each other and it’s so beautiful to watch. I yearn for moments they’re together in the book, and Banghart never disappoints. What Aris and Milek have is real and they deserve happiness together.

Incredibly paced and exciting, there is so much action going on within Storm Fall. Tracy Banghart continues to brilliantly tell the story and develop her plotline. There’s love, laughter and pain in this novel, with lives lost in war. Storm Fall almost eclipses its predecessor in its brilliance and I for one cannot wait to get my hands on the third and final novel in the series Torn Sky as soon as I can!

Source: Netgalley
Format: Kindle ebook
Buy it: Amazon
My Recommendation: This series is BRILLIANT and I highly recommend
Cover: This cover is really pretty--I like it.
Will I read sequel/continue with series: YES! Hope it have a chance to read it soon!!