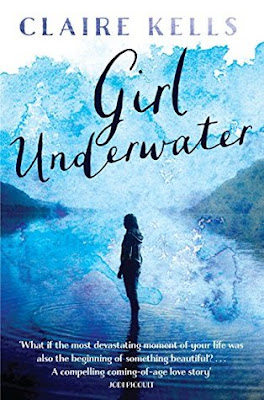 Nineteen-year-old Avery Delacorte loves the water. Growing up, she took swim lessons at her community pool and captained the local team; in high school, she raced across bays and sprawling North American lakes. Now a sophomore on her university's nationally ranked team, she struggles under the weight of new expectations, but life is otherwise pretty good. Perfect, really.

That all changes when Avery's cross-country flight home makes a ditch landing in a mountain lake in the Colorado Rockies. She is one of only five survivors, which includes three little boys and her teammate, Colin Shea, whom she's avoided since the first day of freshman year.

Now, faced with sub-zero temperatures, minimal supplies, and the dangers of a forbidding nowhere, Avery and Colin must rely on each other in ways they never could have imagined.

Claire Kells debut novel Girl Underwater is a tale of survival and endurance in the face of tragedy and the difficulty of moving on when the past remains a haunting memory.

Avery Delacorte is on her way home for Thanksgiving when the plane she’s travelling on crashes in the water near the Rocky Mountains. A talented swimmer, Avery is one of the few survivors of the disastrous crash alongside a classmate Colin Shea; fellow swim team member and all round mystery. Rescuing three little boys and making it to shore, Avery and Colin are determined to keep their innocent charges alive. Yet with temperatures dropping, supplies dwindling and unexpected dangers mounting, rescue seems to be slipping away, meaning Avery and Colin must do everything in their power to keep their little group alive as long as they can if they have any hope of getting off the mountain alive.

Though I was unsure what to expect when heading into this novel, I did enjoy reading Girl Underwater very much. Though the description doesn’t convey it, this novel actually takes place over the course of two different time periods—during the plane crash and some months after as Avery struggles to move on and reconcile her time on the mountain. Girl Underwater is very much a tale of survival, but is also one of acceptance and mourning. It’s about Avery accepting who she was, and who she now is after this terrible tragedy that left her deeply affected and struggling.

Personally I thought Girl Underwater was decently written and well-paced. There were plenty of moments I enjoyed and I felt the romance aspect fell nicely in line with the other themes Kells explored. Having survived a major airline disaster, the bond that forms between Avery, Colin, Tim, Liam and Aayu during their time in the wilderness was deeply moving. The three boys were too cute for words and Kells writes some adorable scenes between them, Avery and Colin as the two adults attempt to keep spirits up and everyone alive.

The fact this novel explored during and after the plane crash wasn’t lost on me. We see so many movies and TV shows where the characters are happily rescued at the end, but how often do we stop and think what happens afterwards? How do people go on with their lives having survived against such tremendous odds? Do they struggle? Do they breeze through everything? What happens?

In Girl Underwater, our heroine Avery is faced with moving forward. Through a number of different moments we see how strong and affecting survivor’s guilt and PTSD can be on a young person who has witnessed and been through something traumatic……it was intriguing and emotional at times. Avery struggled and fought herself; especially considering how deeply her feelings changed after her time on the mountain. Her wants and desires weren’t the same and her fears weren’t something she could easily overcome.

I felt the ending was a tad abrupt for my liking. Don't get me wrong, I was thrilled with the choice Avery made in the end regarding her future, but I would have liked to see her get to that future a little bit more.

Featuring an adorable relationship between the characters and the perfect amount of romance, Girl Underwater is a decent debut by Claire Kells that I enjoyed a lot more than I expected. Definitely recommend if you're looking for an easy but riveting read.

Source: Sent for review by Random House Australia via Netgalley
Format: Kindle ebook
Buy it: Bookworld | The Nile | The Book Depository | Amazon
My Recommendation: If you enjoy survival tales, this is for you.
Cover: While I don't think it does the book the justice it deserves, the more I look at it, the more I seem to like it.
Will I read sequel/continue with series: This is a standalone novel, but I wouldn't rule out reading more by Claire Kells in the future.