Book Shelf: Learning to Live (Hearts Out of Water #2) by Annie Cosby 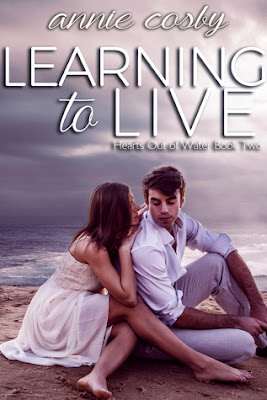 Last summer ended in disaster for Cora. She scurried home, terrified of the secrets she’d uncovered and afraid to be honest with the one person who most deserved it—Rory. But after a grueling year of trying desperately (and unsuccessfully) not to think about what she left behind, Cora finds a surprise on her doorstep.

Rory's little brother, Aidan, has discovered the truth and recruits Cora, along with her best friend Rosie, to go with him to Ireland to explain their selkie heritage to Rory.

Desperate to get back the love she couldn't face last summer, Cora agrees to go. But will Rory want to see her after the way she abandoned him?

On a magical dash through the west of Ireland, following false leads and learning the all-but-forgotten myths of that wild land, Cora will learn even more about the O’Leary family than she ever imagined. And, maybe, just a little bit about herself.

The magic is back in the second Hearts Out of Water novel!

Learning to Live is the second novel in Annie Cosby’s Hearts Out of Water series and is another well told and highly enjoyable romantic tale set for the most part in the beautiful land of Ireland and filled with wonderful adventure, sweet moments and unexpected discovery.

Learning to Live takes place almost a year after the first novel, Learning to Swim finished and sees Cora still struggling to reconcile the decision she made at the end of the summer the year before. Scared and reeling by the truth she’d just learnt, Cora made the decision to run--breaking her own heart and Rory’s in the process. Life has gone on, but Cora still can’t forget the boy she fell in love with and still yearns for. Especially when his brother Aiden turns up on her doorstep, having learnt about his and Rory’s true heritage and desperately begs Cora to accompany him to Ireland to finally tell Rory the truth. Dashing off on a spur of the moment trip with Aiden and her best friend Rosie, Cora hopes to get back the love she lost before…..but will Rory forgive her, especially when he learns the truth? Or has Cora lost him forever?

Backing up a great first novel isn’t always easy, but Learning to Live is even more magical than its predecessor! Set in exquisite Ireland, and exploring both sides of the country, Learning to Live explores just how much the characters have grown and continues to build Annie Cosby’s selkie mythology stone by stone with lovely results.

After the summer she spent in Oyster Beach, Cora made a choice she deeply regrets; letting go of the boy she loved. Learning to Live sees Cora fly across the continent alongside her best friend and Rory’s brother to tell him the truth and hopefully win him back. Personally, I was really impressed by the growth of the characters in this second book. Though there’s nothing wrong with it (at all!) Cora and Rory seemed a little bit like a superficial summer romance in the first book (though I loved them!) but in Learning to Live, I saw a lot more substance to their relationship.

Perhaps it’s because they’ve had time to grow up, but in Learning to Live, Cora and Rory seemed older and wiser and their choices stronger. I also felt Cosby did a great job building their relationship up to forgiveness. All wasn’t instantly forgiven; Cora had to really work to redeem herself in Rory’s eyes. Cora had to face the fears she had while she, Rory, Aiden and Rosie travelled Ireland in the hopes of finding Seamus O’Leary and finding the missing sealskins.

Unlike Learning to Swim which was set in one coastal town, I loved the sense of adventure and fun searching Ireland brought to Learning to Live. Annie Cosby keeps her characters guessing and trying different avenues in the hopes of tracking down the missing man. Aiden’s growing desperation also made for an added mystery as you as the reader wondered what he was hiding.

Swift to read and easy to enjoy, Learning to Live ends in what I’m coming to learn is an Annie Cosby specialty; a cliffhanger. Sweet and romantic at times, Learning to Live weaves elements of magic, romance, friendship and adventure beautifully and leaves me very exciting to read the third and final novel, Learning to Love as soon as it’s released!

Source: Sent for review by the author (Thank you Annie!)
Format: Kindle ebook.
Buy it:  The Book Depository | Amazon | Barnes & Noble | Kobo
My Recommendation: Enjoy paranormal/fantasy? This is perfect for you!
Cover: I think this cover is beautiful.
Will I read sequel/continue with series: Yes! Can't wait for the next book.