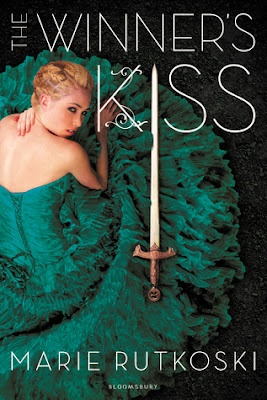 War has begun. Arin is in the thick of it with untrustworthy new allies and the empire as his enemy. Though he has convinced himself that he no longer loves Kestrel, Arin hasn’t forgotten her, or how she became exactly the kind of person he has always despised. She cared more for the empire than she did for the lives of innocent people—and certainly more than she did for him.

At least, that’s what he thinks.

In the frozen north, Kestrel is a prisoner in a brutal work camp. As she searches desperately for a way to escape, she wishes Arin could know what she sacrificed for him. She wishes she could make the empire pay for what they’ve done to her.

But no one gets what they want just by wishing.

As the war intensifies, both Kestrel and Arin discover that the world is changing. The East is pitted against the West, and they are caught in between. With so much to lose, can anybody really win?

The Winner's Kiss is the beautifully written and thrilling conclusion to Marie Rutkoski's Winners Trilogy, seeing Arin and Krestal take their final stand in this riveting finale that will ensnare you from the first page to the last!

After the shocking ending of the previous book, war is in the air within the empire with the Valorian and Herrani armies ready face off against each other. A brokenhearted Arin leads his people, allied with the Dacrans while on the other side of the land Krestal has been sent to a brutal work camp in the icy North after her deceptions were discovered by her father who then betrayed her to the emperor. Arin and Krestal may be far apart but when discoveries are made, the two find themselves together once more, fighting for more than just their lives and their love, but their very freedom.....

As someone who enjoys, and has read her fair share of fantasy novels, I have absolutely no hesitation is saying The Winner's Trilogy has been one of the very best, and one of my very favourites, that I have read. From the first book to the last, the rich, lyrical way Marie Rutkoski has detailed Krestal and Arins story has been spectacular. Deliciously told, stakes have continuously grown, danger has reigned and the sensationally told plotline has captured me.

Rutkoski has introduced and then allowed us to follow two very strong and prominent characters. The series featured a beautiful and powerful romance that never faltered even as it faced it's hurdles, difficulties and when all seemed lost. Keeping us on our toes, Marie Rutkoski managed to surprise and both thrill her readers while managing to give us one romantic, action packed and dire installment after another. Perfectly developed, The Winners Trilogy was exciting and thrilling and so addictive to read--I really can't fault this series!

I have absolutely adored both Krestal and Arin as characters, and following them has been a real joy. From opposing nations their romance was forbidden, but managed to change them in ways that allowed them to stand up for what was right and what needed to me done. The events of The Winner's Kiss see Krestal altered drastically in a way that changes the very woman she is, but Marie Rutkoski only goes to use this change to strengthen Krestal as a character who makes hard choices and who has always fought tooth and nail.

As an action packed and thrilling series, the romance within The Winner's Trilogy has been an important aspect within each novel, yet it never managed to overtake the rest of the storyline--instead helping to enhance the reading experience. As someone who completely adores her romance, I thought the way Rutkoski wrote Arin and Krestal's relationship was brilliant. With so much at stake no matter how you look at it, seeing Krestal and Arin fall in love was beautiful and so thrilling to watch. Every forbidden touch and look was addictive and with so many hurdles throughout the series our couple faced, I was very satisfied with the possibilities and happiness Marie Rutkoski gave them in the end.

Rich and incredibly told, The Winner's Kiss wove thrilling battle scenes, spectacular romance, unexpected friendship and wonderful strategy to tell the final tale in Marie Rutkoski's Winner's Trilogy. Thrilling until it's perfect ending, this book couldn't have been better; allowing Marie Rutkoski to cement her place was one of my favorite fantasy writers and someone I'm guaranteed to follow no matter what she releases next!

Source: Sent for review by Bloomsbury Australia (Thank you guys!)
Format: Paperback
Buy it: Bookworld | The Nile | The Book Depository | Amazon
My Recommendation: A MUST read fantasy series.
Cover: A beautiful cover and one that fits perfectly with the rest of the series!
Will I read sequel/continue with series: This is the last book in the series but I'll definitely read more by Marie Rutkoski in the future!