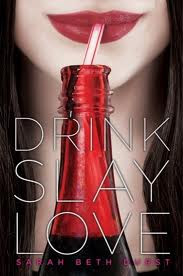 Pearl is a sixteen-year-old vampire... fond of blood, allergic to sunlight, and mostly evil... until the night a sparkly unicorn stabs her through the heart with his horn. Oops.

Her family thinks she was attacked by a vampire hunter (because, obviously, unicorns don't exist), and they're shocked she survived. They're even more shocked when Pearl discovers she can now withstand the sun. But they quickly find a way to make use of her new talent. The Vampire King of New England has chosen Pearl's family to host his feast. If Pearl enrolls in high school, she can make lots of human friends and lure them to the King's feast -- as the entrees.

The only problem? Pearl's starting to feel the twinges of a conscience. How can she serve up her new friends—especially the cute guy who makes her fangs ache—to be slaughtered? Then again, she's definitely dead if she lets down her family. What's a sunlight-loving vamp to do?

Drink Slay Love is an impossibly quirky story that will have you smiling and grinning over Pearls antics as she navigates her new world and feelings!

Sticking to a very traditional sense of vampires with an extremely fun twist, author Sarah Beth Durst entices you with Pearl’s tale. Durst’s writing style fits in with the story well and there’s a sense of sophistication to her writing, one that translates well with the centuries old vampires she writes about that litter Pearl’s family. I literally laughed out loud over some of the things Durst wrote into the story. Some of the lines she writes are so cheesy that they’re actually brilliant and I found it hard to keep a smile off my face on many occasions as I read.

Pearl is such a fantastic character to read about. She’s so complex and complicated and really makes the story what it is. Initially when I first began this book I worried over whether I would like Pearl or not. In the beginning of the story she comes across as somewhat mean and uncaring towards humans, which essentially she is, but she also has such a fun side to her that I enjoyed reading about. Her sarcastic attitude and quick tongue make for some interesting reading and her dislike for humans in the beginning of the book make her an intriguing character to follow. One of the things I found I liked best about Pearl is that she’s far from perfect. Described in the premise as “mostly evil”, this is very true of Pearl. Pearl is a vampire, through and through, and she makes no excuses for it. She sees humans as snacks and doesn’t care much for them.

As a vampire, she is self-centred and involved, but she changes. As the book progresses, it’s wonderful watching the growth Pearl undertakes as a result of her run in with Mr. Sparkly and Pointy, the unicorn that ultimately sets in motion the changes in Pearl. Seeing her befriend some of the humans, including Evan and Bethany, it’s nice seeing her develop a conscience. While she’ll never be exactly sweet and innocent, Pearly definitely becomes a better person, err vampire, and it shows in the choices she makes and actions she chooses later on in the story. She’s still remarkably flawed, but she wants to be better and that means so much.

With a quirky plotline and hilarious one-liners, there's a vast array of characters that add read colour to this book. I admit I was lost with all the Aunts, Uncles, and Cousins Pearl has, but they and all the unique humans she befriends add so much flair to the story. Evan and Bethany excel as well as the oh, so funny “vampire slayers” Zeke and Matt. Add in a few “popular types” and some athletes, and Durst manages to step outside these stereotypes and bring all these characters together with one common goal.

Full of twists, turns and hilarious situations, Drink Slay Love is a quirky read, with a plotline you’ll love and become immersed with. This is the perfect book to sit back and relax with; laughing and smiling over Pearl and her fabulous take on her worlds, both old and new. This is one book you won’t regret picking up!

Source: Sent for review by Allen & Unwin Australia (Thank-you very much)
Format: Paperback
AU Release Date: Available now!
Expected AU Price: $16.99
Recommend: Yes.
Recommend borrow or buy: Buy it.
Cover: It's so very simple, but when you hold it in your hands the simplicity of it is truly brilliant
Read sequel/continue with series: This is a stand alone, but I'm desperate for more from Durst!
Challenge: 2012 TBR Pile Reading Challange.