Welcome to the 10th and final stop on the Australian Blog tour for Fated by Sarah Alderson! I hope you've all enjoyed the tour--there were some pretty awesome stops to beheld with some very unique (and often hilarious) posts to help celebrate the Australian release of Fated yesterday!

Today I have the chance to chat with the incredibly wise Sarah about her books, including the fabulous Fated and get an insight into this extremely talented author. Honestly guys, Sarah is an author to watch. I can see big things in her future!
Here's what transpired..... 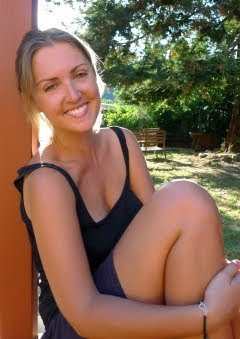 Hi Sarah!
I’m such a huge fan of your books, both Hunting Lila and Fated and I’m so excited to have the chance to talk with you today!

I’ll dive straight into it, shall I?


1. Your debut novel Hunting Lila was released in August of last year and your second novel in a completely new series, Fated, hit shelves in January and here in Australia yesterday, both to rave reviews and instant success. How does it feel knowing how much people adore your work?
Oh my goodness. I’m not sure how to answer that. Except to say THANK YOU! I feel quite sheltered because I live in Bali and there are no bookshops here and most people don’t know that I’m a writer so I feel very distant from the notion of success. Most days I’m just writing in a bubble. I try not to read too many reviews (except the five star ones!) but I am aware of the huge love for both books particularly from bloggers and that’s been awesome to experience. It feels very humbling and incredible to think people love these characters which all came from my head and I still feel amazed on a daily basis that people have read books that I’ve written. It’s hard to get my head around. I’m making people happy just by telling stories – that is mind-blowing. So yeah, it makes me happy – particularly all the emails and tweets from people.

2. Hunting Lila, Fated and Losing Lila, the sequel to Hunting Lila? Wow, you’re a writing machine! Do you ever have to push yourself to write or do the words just flow?
Most days the words just flow and if I’m having to force it then I stop and do something else. But I love my characters and so I am usually desperate to keep writing to see what’s going to happen to them.

3. Every single one your characters in both your books are so well rounded and unique—they really seem to jump off the page at you, are any of them based on people you know?
Oh, yes! Not all though. I think as a writer in many ways you inhabit your characters – they all contain pieces of you because you have to dig deep and feel their emotions, even the truly evil characters – you need to understand WHY they’re that way and why they’re acting the way they are. Writers need a lot of empathy. It’s a pre-requisite for the job.

Is Lila me? No, but she definitely has pieces of me in her (her stubbornness, her insecurities when I was that age). Same for Evie (her snarkiness!). I tend to base characters on actors – only to get an idea of what they look like (you can see my fantasy casts on my website) but when I start a story I usually have no idea of their actual character until I start writing and often times I’m really surprised because they might be very different from who I first thought they were going to be. That’s one of the joys of writing.

The only ‘real’ characters in my books are Harvey (who is based on my best friend’s husband) and Evie’s dog Lobo.

4. If you could have any of the abilities any of your characters have in either Hunting Lila or Fated, which would you want and why?
I’d like to be a telekinetic shape-shifter. I’d shift so I looked like Angelina Jolie and be able to kick ass like Lila without having to lift a muscle.

5. What do you think would happen if Lila (Hunting Lila) and Evie (Fated) ever met?
That’s a great question and one I’ve actually thought about. I’m not too sure they’d get on. They’re very different. Evie’s a lot less naïve and more cynical than Lila. She’s tougher and more aggressive. I can see them teaming up well to fight the bad guys though. The one thing they do have in common is they’re smart, they ask questions, they really have a strong notion of wrong and right, and they don’t take anything lying down. So maybe they could band together as a crime fighting duo with a wicked line in put downs. And Lucas and Alex could be their wingmen.

(I'd like to see that! All four of them kicking evil butt!)

6. Not that we’d ever want them fighting, but who do you think would win in a fight, Lucas (Fated) or Alex (Hunting Lila)?
Oh man, I can’t have my two favourite boys fighting. I can’t answer that. Lucas is obviously the better swordsman and he has the advantage of being able to turn invisible. But Alex is a Marine trained in special ops. He’s brilliant at strategy and at performing under pressure. I think Alex would make smarter decisions after calibrating all the risks, whereas Lucas would throw himself into danger but is quick enough and lethal enough to survive.

(I kinda hate the thought of them fighting too, but imagine it. Muscles flexing, possibly shirtless?? Just think. They'd be all sweaty and.... Hmmm, sorry, I'm digressing....)

7. If we had a look at your bookshelf, what would we find there?
Well you’d have to look at my Kindle because I hardly have any books in Bali – they go all mouldy because of the rain. My favourite books of the last year though were Blood Red Road, The Sisters Brothers, White Oleander, On Jellicoe Road, Will Grayson, Will Grayson, The Red Tent, Snowdrops & Ready Player One. I’m looking forward to starting The Fault in Our Stars by John Green and The Marriage Plot by Jeffrey Eugenides.

I’m also reading an amazing book called Half the Sky at the moment, which should be required reading. It’s a non-fiction book about projects in developing countries that empower girls and it’s so inspiring and also a very powerful reminder of how lucky I am. I honestly believe that girls can change the world. I’m all about empowering girls. That’s what I want to focus my energy on through my writing.

8. When did you know you wanted to be a writer?
When I was writing Hunting Lila. I’d never written before and very early on in writing that book I fell completely in love with the characters and with the act of writing. It was cathartic and exciting and wonderful to be locked in this world with Lila and Alex. I cannot describe the high I get from writing. I enjoy it so much that I simply cannot imagine doing anything else and being as happy.

9. If you could meet anyone, alive or dead, real or fiction, who would it be and why?
I wouldn’t mind meeting Alex in real life. I just wish he existed. And Lucas for that matter. But aside from the creations of my own mind I’d love to meet Nelson Mandela because I’m writing a book at the moment set in the 1980s, partly in South Africa, and it would be awesome to ask him some questions. He’s a great man.

Runners up: Donald Draper from Mad Men and Spike from Buffy. Yes, I am that shallow.

(Seriously, I'd totally like to meet, potentially kidnap Alex too. He's Yummy!)

10. I’m sure you’ve got tonnes more up surprises up your sleeve, but what can we expect from you next?
I’ve completed three more books since Fated (two sequels to Fated and a new standalone). I’m hoping we’ll have news to share on those soon. And right now I’m working on two new manuscripts – both new territory for me. One is a YA contemporary (with a thriller aspect to it) and the other is an adult book (the one set partly in South Africa) but the journey from starting a book to finishing one is a long and bumpy ride so we’ll see how they both go. I may end up ditching both. Hunting Lila has been optioned by an incredible production company and they’re about to start interviewing screenwriters so I’m hoping to be involved in that process and to learn from it (though I won’t be writing the screenplay myself!).

(*Drools* All those books! So eager to get my greedy little hands on them)


I just wanted to thank-you so much Sarah for taking the time to answer my questions. It means the world that you’d take the time to chat with me. Personally, I cannot wait until the release of Losing Lila in August which seems so far away and I’m dying to see what you have in store for the next Fated book too! Good luck with all your future endeavors and I can’t wait for more from you :)

Read my reviews of Fated and Hunting Lila!

Make sure you check out all the previous tour stops!

I'd like to say a massive thank-you to Caroline and Simon & Schuster Australia for putting together this amazing tour and for allowing me to be a part of it! I hope you've all had a fun time and have checked out some, if not all, of the other stops :)