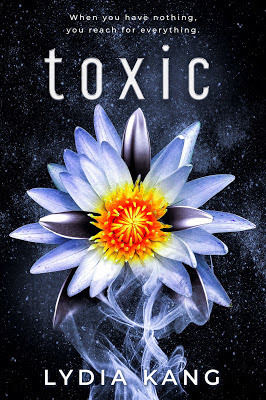 Cyclo, the first and largest biological ship of its kind, is dying. A small crew of mercenaries have handed over the rights to their life to document the death of the ship, but the abandoned ship is anything but abandoned―one girl has been left behind.

Hana has known nothing but the isolation of a single room and the secret that has kept her there for seventeen years. When she meets Fennec, the boy assigned to watch her, she realizes that there is a world she has yet to experience but she is doomed to never meet.

When crew members begin mysteriously dying, Hana and Fenn realize that they are racing against the death of the ship to find a way to survive―unless someone kills them even before Hana’s truly had a chance to live.

Toxic is Lydia Kang’s latest release and is an intergalactic young adult science fiction romance that is perfect for fans of Amie Kaufman and Meagan Spooner with its fast paced story, mystery and adventure.

Cyclo is the first and largest biological spaceship of its kind, but now after decades in use it is dying. After its inhabitants evacuate, a small group of mercenaries are sent to the ship to document its death in exchange for priceless benefits for those they leave behind. Yet the ship is far from abandoned; Hana a seventeen year old girl who has spent her life within the confines of her room and whose existence has remained a secret from Cyclo’s crew has been left behind. Drawn to the mercenary Fennec, a young man who has prepared himself to die, Hana finds herself finally beginning to live even as the conditions on board Cyclo begin to deteriorate. Then the mercenaries begin to die mysteriously and it soon becomes clear that Hana and Fenn will have to discover the secrets of Cyclo in order to stay alive but they'll need to think of something quick before they run out of time or the killer comes for them too.

Lydia Kang really impressed me when I read her novel The November Girl, so I knew I had to read Toxic as soon as I heard about it. Set in a futuristic science fiction world, Toxic is a standalone novel that will appeal to fans of sci-fi who like their stories woven with suspense, mystery and danger. Part thriller, part romance, Toxic is told through the varying perspectives of main characters Fenn and Hana and depicts an adventure filled story where the characters must find a way to stay alive as the ship they are on begins to deteriorate and a killer hunts them.

Toxic was a really intriguing novel. Much of its charm comes from the mystery and unknown within the story. Set in space, aboard an intellectually and emotionally capable ship named Cyclo Toxic features elements of space opera and danger to bring the tale to life. I enjoyed the focus on what was going on right then, right there, but I think I would have liked to see a bit more world building within this novel too. The world Hana and Fenn inhabit remains much of a mystery; Kang only explained the basics and just enough to allow readers to understand what was going on within Toxic without being too confused.

Hana and Fenn were easy enough to follow and quite likable. Hana was naïve and innocent to many ways of the world due to her isolation, but I enjoyed seeing her grow, even if it was in such a small amount of time. Hana and Fenn had a fast moving relationship that developed quickly but was still sweet and endearing.

Toxic was an easy to read novel that draws readers into a dangerous world of danger and exhilaration. Lydia Kang has created a story that kept me guessing until the final page and brings Toxic to a satisfying close. Definitely worth a read for sci-fi lovers!