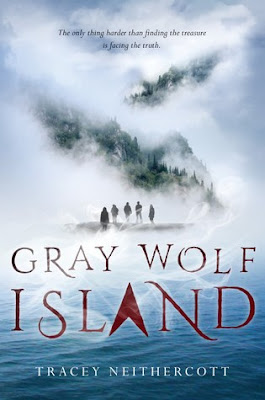 Right before Sadie died, she begged her sister, Ruby, to do the one thing she could never do herself: Find the treasure on Gray Wolf Island.

With just a mysterious treasure map as a guide, Ruby reluctantly allows some friends to join her on the hunt, each of whom is touched by magic: a boy allegedly born to a virgin, a girl who never sleeps, a boy who can foresee his own death, and a boy with deep ties to the island. Each of them is also keeping a secret—something they’ll have to reveal in order to reach the treasure.

As the secrets come to light, Ruby will have to decide: Can she make peace with her friends’ troubled pasts and continue to trust them? Can she forgive herself for doing the unspeakable? Deep in the wilderness of Gray Wolf Island, Ruby’s choices will determine if they make it out with the treasure—or merely with their lives.

From debut author Tracey Neithercott comes a darkly compelling tale of profound friendship, adventure, and finding the strength to tell the truth.

Tracey Neithercott’s debut novel Gray Wolf Island is whimsical and deeply mysterious tale that will sweep you into a tale of wonder, adventure and unexpected discovery.

Seventeen year old Ruby has a secret about the day her twin sister Sadie died, a secret that keeps her from being able to move on. All Ruby can think about is that day….and the one thing Sadie wanted she never had the chance to do; find the treasure on Gray Wolf Island. After finding a mysterious treasure map, Ruby sets out with a band of unlikely friends who join her on the hunt; a boy allegedly born to a virgin, a girl who cannot sleep, a boy who has foreseen his own death and a boy whose whole life seems to have been searching for the treasure. Together the unlikely group delve into Gray Wolf Island, but with the island determined to see the teens reveal their truths, will Ruby’s grief keep her from truly living?

Heading into Gray Wolf Island, I think I had a specific picture in my mind of what I thought the novel would be. I envisioned something more fantasy-like in nature, maybe set in a fantasy world with elements of magic or something like that. Instead Gray Wolf Island is set in a small modern day town and takes place near the coast of Maine. I’ll admit; this threw all my thoughts of the novel out the window and instead left me with something similar to Maggie Stievfater’s The Raven Cycle series.

Gray Wolf Island had that aura of wonder and light-hearted innocence woven together with mystery that really keeps you thinking throughout the story. Neithercott does a good job detailing the story, although the pace of the novel is slow, even if the prose itself beautiful and lyrical.

The characters were decent enough to follow including main character Ruby whose eyes the majority of the story unfolds through. Elliott, Gabe, Charlie and Anne all join Ruby on her travels to Gray Wolf Island and there’s also the mysterious individual called Cooper whose motivation and importance readers will definitely wonder about.

I don’t want to give away spoilers, but Gray Wolf Island isn’t what is seems and no one is as they appear. There’s a few unexpected revelations—especially the surprising ending that will leave you shaking your head; possibly in exasperation, possibly in disappointment. Personally, I was a little bit underwhelmed with the conclusion of Gray Wolf Island. For everything that happened during the story, I was just expecting something a bit more impressive with the ending.

Overall, despite my issues with the ending, Gray Wolf Island is a unique and lyrical tale worth a read and is promising until it’s somewhat lackluster ending. I’ll be interested to see what Tracey Neithercott writes next however as I think she has a lot of potential.