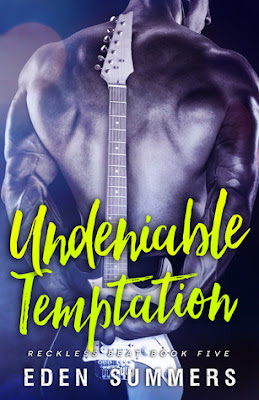 Haunted by a kiss.

With his destructive marriage behind him, Ryan Bennett can no longer deny his insatiable attraction to the one woman in control of his future. He needs her. Craves her. She’s the only glimpse of happiness through the building drama in his life and yet one drunken kiss has pushed her further away.

Tormented by what’s at stake.

Leah Gorman’s management contract states she can never act on her feelings for any members of the Reckless Beat band but Ryan has always owned her heart. No matter how long he’s held her captive with his deep soul and easy friendship, he’s off limits. End of story. If only her heart would get the memo. She can’t resist him. Even when their attraction gets in the way of her job.

The price of love is high. Is it worth the cost?

With Leah’s career on the line and Ryan’s reputation in tatters, ignoring their attraction may prove safer than risking everything they hold dear. They have to decide what matters most—their years of friendship, or a chance at love that will destroy them both if they can’t make it work.

Undeniable Temptation is the absolutely brilliant conclusion to the Reckless Beat series by Eden Summers and is an incredibly sexy, heart-warming and emotional read that is filled with all the sensuality, humour and friendship that make this series great!

Ryan Bennett was blindsided when his wife served him with divorce papers, but getting out of his loveless marriage has been a blessing in disguise; allowing him to finally acknowledge the raging attraction he feels for his band manager and best friend, the woman who has held is heart for years. Leah Gorman has been haunted by the kiss she shared with Ryan after he discovered his estranged wife’s plans for divorce, but can’t help the way she feels about the man she’s been in love with for years. It’s hard enough facing the backlash that comes from being connected to someone in the public eye, but with Leah’s management contract stipulating against an intimate relationship with a client, Leah and Ryan could be over before they begin if Leah’s bosses discover the connection between them. Will Ryan and Leah be able to have a future, or will work commitments and Ryan’s past keep them apart forever?

Having fallen in love with the series a little bit more with each and every novel, I was absolutely thrilled with this ending to the Reckless Beat series. I have loved reading about these characters and watching them fall in love with each novel and was very happy with the way in which Edden Summers chose to conclude the series—it couldn’t have been more perfect in my eyes.

Undeniable Temptation is the story most fans, like myself, have been waiting for—Ryan and Leah’s story. Finally. And boy does it entertain. Long awaited, Undeniable Temptation is Leah and Ryan at their best. I loved them before, but I love them even more after this story. Leah and Ryan just go so well. There’s chemistry, attraction and a lovely foundation of friendship. Summers has built them up for so long and us readers have just been dying to see the final result….

I mean honestly….Leah is a strong, capable and successful businesswoman who manages one of the biggest bands in the world and manages to keep all five men in check; a feat that isn’t always easy with Mason Lynch involved. But she does it, while managing to remain composed and poised—that’s a strong woman right there. And Ryan? Ryan was just the perfect gentleman….with Summers giving him a shakeup in this novel and allowing readers to see another side to Ryan Bennett. It was wonderful seeing him admit how he felt about Leah and finally acknowledge that she was the one for him—and then go for it; wholeheartedly and one hundred percent.

Sensual and thrilling, Undeniable Temptation saw all out favourite characters back with the Reckless Beat guys helping and supporting Ryan and Leah like never before. Mason proves again he’s more on point than people give him credit for as the adorable relationship he has with Leah stands out too in this instalment.

Ending the series in perfect fashion, Undeniable Temptation is a fabulous addition to a series that has only gotten better with every book. Eden Summers has won a fan in me with Reckless Beat! I can’t wait to see what she releases next!