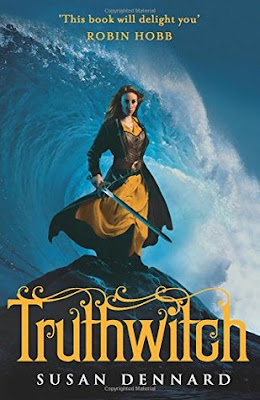 In a continent on the edge of war, two witches hold its fate in their hands.

Young witches Safiya and Iseult have a habit of finding trouble. After clashing with a powerful Guildmaster and his ruthless Bloodwitch bodyguard, the friends are forced to flee their home.

Safi must avoid capture at all costs as she's a rare Truthwitch, able to discern truth from lies. Many would kill for her magic, so Safi must keep it hidden - lest she be used in the struggle between empires. And Iseult's true powers are hidden even from herself.

In a chance encounter at Court, Safi meets Prince Merik and makes him a reluctant ally. However, his help may not slow down the Bloodwitch now hot on the girls' heels. All Safi and Iseult want is their freedom, but danger lies ahead. With war coming, treaties breaking and a magical contagion sweeping the land, the friends will have to fight emperors and mercenaries alike. For some will stop at nothing to get their hands on a Truthwitch.

Truthwitch is the first novel in Susan Dennard’s latest series, The Witchlands and is a poignant fantasy tale that introduces readers to a dangerous and daring new fantasy world and is perfect for fans of Sarah J Mass, Maria V. Snyder and Marie Rutkoski.

Witches Safiya and Iseult have a habit of finding trouble. With Safi being a rare Truthwitch and Iseult’s true abilities hidden even from herself, the two best friends have learnt to rely on each other above all others, but when a plan to get back money stolen from them goes array, Safi and Iseult find themselves thrust into the middle of a war between the various empires that make up The Witchlands and racing to find a way to stop the empires breaking the decades long truce that stands between them. Court politics, political plans and daring escapes are abound as Safi and Iseult attempt to keep Safi from the hands of those who would use her abilities for their own selfish needs. Alongside the Nubrevan Prince Merik, whose pirate ways and ego grate on Safi, Safi and Iselut begin to discover there are more dangerous plans in motion than they could ever have imagined…..

In the interest of full disclosure, Truthwitch and I didn’t get off to the best start. Despite my excitement to begin reading and all the good things I’d heard, I struggled in the first 100 or so of the story. I can’t pinpoint exactly what it was—the strange names, the complexity of all the lands and peoples we met or all the information Dennard thrust at you straight away, but something left me with a bit of a sour taste in my mouth. And then I began to enjoy the story more…..

Somewhere around halfway my interest began to pique and I began to find myself interested and invested more with the characters. There’s a lot to take in within Truthwitch and I’ll admit I don’t fully grasp everything we’re introduced too, but there’s no denying the world Susan Dennard has created is very vast and unique. Told in varying POV, Truthwitch introduces readers to a number of different characters, all from different walks of life and places within the story. Safi, Iseult and Merik are important voices, but as is Aedunen, whose role as a Bloodwitch and purpose within the story is still very shrouded in mystery to me. I can see him as a potential ally and even love interest for Iseult down the track.

I loved that Safi and Iseult were both such strong, capable young woman. Their closeness and dedication to each other is commendable; with the love shared between these two Threadsisters undeniable. It’s always fabulous seeing a fantasy novel follow strong female personalities capable of sparing, fighting and engaging with their enemies as well as any man!

Filled with magical abilities, elements, warring empires, brave young woman and even some dashing romance, Truthwitch is a danger filled tale that kicks off The Witchlands series well, and despite its rocky start, leaves me very much ready to see what happens to the characters next!