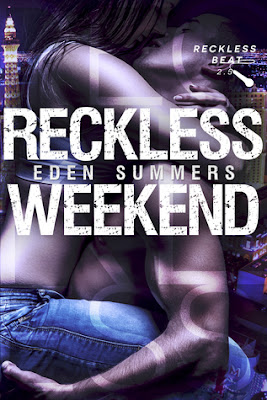 In Vegas, a lot can happen in twenty-four hours.

What do you get when you mix a rock band as hot as Reckless Beat, women strong enough to capture several of the bad boys’ hearts, and a bet that sparks a competitive streak?

Boundaries will be pushed, alcohol will be abused, and loads of sarcasm will be shared.

Once the games are over, it’s time to make a commitment. But love in the limelight is never easy. The past is trying to catch up with the present, and the pressure may be too hard to handle.

Seduction, torment, laughter, and heartbreak—one reckless weekend will test each member of the band and the women who’ve claimed their love.

Eden Summers takes the Reckless Beat gang on the road in Reckless Weekend, with all our favourite characters joining Alana and Mitchell on bachelor and bachelorette nights out in Vegas for a night full of fun, laughs and shenanigans.

With Alana and Mitchell’s wedding just around the corner, all our beloved Reckless Beat characters join the happy, if not somewhat stressed, couple as they head to Las Vegas for a weekend of challenges, excitement and alcohol infused dares in the lead up to their big day. What can go wrong as our beloved characters celebrate the upcoming nuptials with all the sex, sarcasm and tantalizing chemistry we’ve come to expect from this series?

I have to say I really loved the blend of fun and seriousness Eden Summers weaves into this novella. Reckless Weekend is a seriously fun tale to read. The challenge between the guys versus girls was laugh out loud funny at times and the cheeky dares came undone in spectacular fashion. However, Summers also mixes a lot of deep emotion and even loss into this tale as two of our beloved characters have a painful situation to deal with.

Told through the varying POV’s of multiple characters, there’s plenty of laughs amongst the tears in Reckless Weekend as we get to know some of the other characters in the series we haven’t previously followed. Leah’s, Sean’s and Ryan’s were three voices I enjoyed following and whose stories I’m very excited about reading in the future.

Coming into the series late means I have an idea of where certain plot arcs are going and who’s going to be paired with who, so I’m enjoying seeing Eden Summers set little things in motion. I love being able to jump from one book straight into the next and loved seeing our two past couples, Alana and Mitchell and Blake and Gabi feature in this story alongside all their friends.

Reckless Weekend also sets the stage for the next full length novel, Undesired Lust with our first glimpse into the mind of Mason and a cliff-hanger ending that will leave you wondering what the fate of Reckless Beat will be.

A great novella and addition to the series you won’t want to miss, Reckless Weekend doesn’t disappoint and leaves me raring for more!