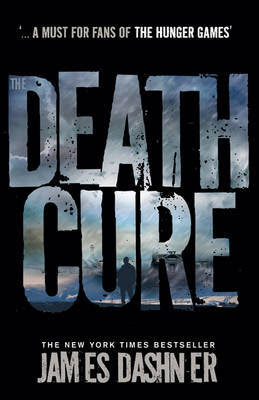 The Trials are over. WICKED is planning to restore the survivors' memories and complete the final cure for the Flare.

But Thomas has already remembered more than they think. And he knows WICKED can't be trusted...

The time for lies is over. But the truth is more dangerous than Thomas could ever imagine. Will anyone survive the Death Cure?

The Death Cure is the third book in James Dashner’s exhilarating Maze Runner series and though not the final novel written by Dashner in this series, concludes Thomas and the Gladers experience in the Trials in fast paced and riveting fashion.

After everything they’ve been through in the Maze and the Scorch, Thomas and his friends have successful completed the trials and Wicked are ready finally to restore their memories. But after coming to see things in a new light, does Thomas really want his memories back? From what he remembers so far, Thomas knows Wicked are not to be trusted, but as those closest to him struggle with decisions and shocking revelations, will Thomas and his friends find a way to escape Wicked? Or will they find themselves paying the ultimate price in Wicked’s relentless search for a cure?

Though I’m aware a lot of readers were unsatisfied with the conclusion The Death Cure brought to the series, I personally felt James Dashner ended the trilogy well. Featuring all the action, danger and mystery I’ve come to anticipate with this series, The Death Cure was emotional, absorbing reading with none of the characters safe in this final instalment and Dashner pretty much guaranteeing not everyone will make it out alive.

Fast paced and action packed, The Death Cure sees Thomas make great sacrifices and experience great loss, highlighting once more what a wonderful protagonist he has been. Thomas has always been a strong voice to follow and I’ve loved his way of thinking, calculating and planning as James Dashner has told his tale. As someone who predominantly enjoys following female characters, Thomas has never been anything but wonderful to read about and I commend Dashner for writing a male lead a female reader genuinely enjoys reading about.

After all the developments with Theresa throughout the series, I was initially perplexed when it seemed Dashner planned to give Brenda a bigger role within the storyline as he slowly lessened Theresa involvement. However over time I really came to love Brenda and her personality within the series. She was sharp and I know Thomas seemed to really care for, possibly even love, Theresa but I really liked his relationship with Brenda and thought it was sweet how his subconscious automatically thought of her in times of peril.

I won’t touch too much around the losses experienced in The Death Cure to avoid spoilers, but will say James Dashner takes the life of two fairly focal characters. These deaths saddened me, especially as one kind of came really unexpectedly, but I’m going to put it down to Dashner wanting to highlight how dangerous everything Thomas, the Gladers and their other friends went through. With so much violence and brutality within Dashner’s world, loss of life almost seems inevitable at times…..

Exciting and daring, The Death Cure concludes the first three books in the Maze Runner series focusing on Thomas and the Gladers. I know James Dashner has released a couple of others since The Death Cure’s initial release and I love forward to reading those and discovering more of this dangerous Flare infected world.