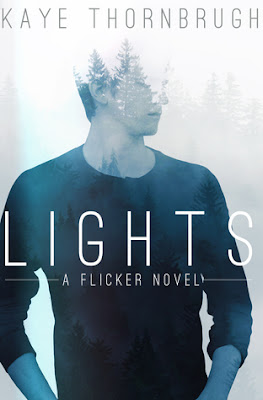 Lee Capren’s life is complicated. She’s in love with a boy whose heart she broke to protect him, her home is wrecked—and she and her friends have just been arrested for practicing magic illegally.

With the evidence stacked against them, they’re given a choice: serve the Seattle Guild as apprentices, or serve time in prison. The decision seems simple, but the consequences will be greater than anyone can imagine.

Navigating Seattle’s magical scene is tough enough, even before the Summer King requests Lee as his emissary to the Winter Court—a request she can’t refuse. Suddenly, she’s entangled in a conflict brewing between two ancient powers. But there’s more to this faerie feud than meets the eye—and signs point to a shadow from Filo’s past.

The coming storm will destroy all that Lee holds dear, unless she sacrifices everything to stop it.

Lights is the sensational final instalment in Kaye Thornbrugh’s Flicker series and is a rich and powerful conclusion to what has been an endlessly beguiling tale filled with adventure, romance and fantastic characterization.

Ever since Lee Capren was rescued from the Summer Court her life has become increasingly complicated. She recently hurt the boy she loves in order to protect him, she and her friends have been arrested for practicing magic illegally and now she’s expected to serve the Seattle Guild as punishment or face untold horrors instead. The choice should be easy, but choosing to become apprentices comes with its own dangers and trepidations for Lee and her friends. The Summer and Winter courts are on the brink of war, and now the Summer King has requested Lee and Filo be his emissary’s against the Winter King. Saying no doesn’t seem to be an option, but saying yes means journeying to the place she hoped she’d never see again. And, as it becomes increasingly clear something sinister is going on with both Summer and Winter kings, Lee will have to find the strength to do the impossible or lose all she holds dear….

I’ve said it before and I’ll say it again; Flicker is like the love child of Cassandra Clare and Julie Kagawa. It’s that perfect blend of fey and magic to entrance, enthrall and easily addict. From beginning to end, this series has been spectacular to read and sensational to follow. Kay Thornbrugh was created a rich and vivid world of magic, and has filled it with such complex, layered characters who are personable and highly likable.

Lights highlights all that has made the Flicker series so incredible and allows readers to follow Lee, Filo, Nasser, Jason, and Alice once more. Told in the third person, Kaye Thornbrugh takes readers on another adventurous tale as Lee and her friends fight for everything they hold dear with some help from Henry, Davis, and Clementine, as well as some new characters they meet along the way.

Secrets are revealed, origins discovers and connections made in Lights, with Thornbrugh detailing a fast paced and intriguing story that will have you reading along addicted to the very end. Perfectly written, I loved seeing the romance within this story mingle with action, magic and strong bonds of friendship and family. I honestly can’t fault this series at all and can’t say I’ve ever thought it anything less than 100% brilliance!

I’m seriously not ready to let this series go! Introducing readers to this aspect of her world in Lights, Kay Thornbrugh opens up so many possibilities with the Guild and its members. I’m very intrigued by Matt and Leander Flanagan–these two mismatched half-brothers really seem like they could have an awesome story behind them if Thornbrugh ever chose to explore it, and I for one hope she does. Deidre too is someone I’d love to see more of—maybe watch her discover magic. Even Clementine and Davis would be interesting to get to know a little bit more.

Magical from beginning to end, Lights is a fantastic conclusion to a brilliantly written series I can’t recommend enough!

Source: Sent for review by the author (Thank you Kaye!)
Publisher: Independently published
Format: Kindle ebook
Release Date: November 13th 2016
Purchase: Amazon | Kobo
Final Thoughts: This series has truly been a joy to read. I'm not ready to say goodbye but will definitely be on the look out to read whatever Kaye Thornbrugh writes next!