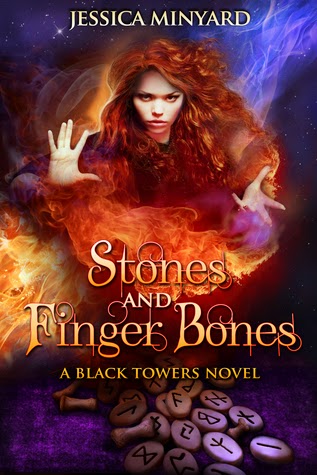 Aurelia Barone, Jewel of Starry Stone, harbors no illusions about the purpose of her life as heir to the throne. But after two failed betrothals, she starts to feel like nothing more than a pawn being moved aimlessly about a game board.

Until the night she loses everything.

Kidnapped by a wise-cracking mercenary with more than one identity, Aurelia embarks on a mission across land and sea to avenge her father’s death.

But an evil is rising from the ashes of memory. Insidious magic is stirring. The dregs of a once-powerful nation are thirsty for blood and revenge.

They seek to harness Aurelia. To tempt her. To manipulate her.

And if necessary, to destroy her.

Told in third person and through the eyes of numerous characters within the story, Stones and Finger Bones introduces readers to Aurelia Barone, heir to the throne of a mighty kingdom and a feisty, fiery haired young woman whose life is upturned when her father the King is murdered and Aurelia finds herself kidnapped shortly after by an infuriating mercenary named Rycen.

Taken cross-country by the smart-mouthed and infuriating young man, Aurelia has her eyes opened when she begins to see a different side to her kingdom than she’s ever seen before and learns that her father and his military are responsible for some shocking actions against the magic users within the kingdom. Even worse, the individual responsible for orchestrating her father’s murder is closer to home than Aurelia could have anticipated, and the things that Aurelia may have to do in order to retain her throne may affect her more than she could ever have imagined……

I found that I really enjoyed this story. Minyard’s world building was very impressive and I found it easy to follow the heroine of the story. Stones and Finger Bones introduces readers to a vivid world with magic, politics and demonic creatures woven together. High stakes and romance weave together and the darker side of the world depicted makes for some intriguing reading.

Aurelia was an easy heroine to follow and I appreciated the growth Jessica Minyard forced her to undertake in this first novel alone. Aurelia is quite likable, and her highborn nature blends well with her sharp tongue and attitude to create a real go-getter of a girl considering her place as a princess and a lady of her society.

As the man responsible for kidnapping Aurelia and taking her as somewhat of a hostage, I loved Rycen. He’s my kind a male lead within a fantasy story; cocky, rash but oh, so capable, confidant and fierce. I adored the chemistry between he and Aurelia that developed and grew and simply made for a thrilling romance!

Now, I don’t want to give too much away, but something Aurelia does towards the end of the novel left me flabbergasted. I actually feel quite heartbroken and whilst I know romances don’t completely make a story with other aspects just as important, I found myself invested in Aurelia and Rycen’s relationship and as such, I feel really gutted over what transpired and the choice Aurelia makes…..It. Is. Not. Fair!

Personally, I don’t know whether this is part of a bigger plan author Jessica Minyard has for the series, but I’m already hoping and praying to see something magical happen that will give us all a second chance with Rycen. It’s too heartbreaking for me to consider anything else at this moment.

Rich and thrilling, Stones and Finger Bones kicks off a great new fantasy series that is sure to appeal to fans of Sarah J. Maas Throne of Glass series!

Source: Sent for review by Xpresso Book Tours and the author (Thank you ladies!)
Format: Kindle ebook.
Buy it: Amazon | Barnes & Noble | Kobo | iTunes
My Recommendation: Fantasy fans will enjoy this for sure.
Cover: I love the colour combination.
Will I read sequel/continue with series: Yes......