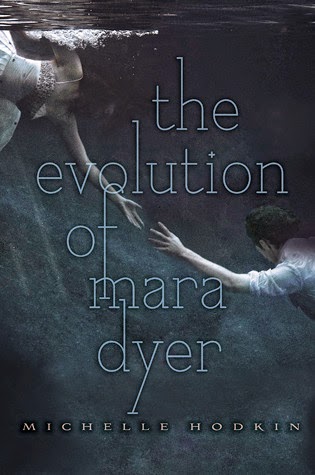 Mara Dyer once believed she could run from her past.
She can’t.

She used to think her problems were all in her head.
They aren’t.

She couldn’t imagine that after everything she’s been through, the boy she loves would still be keeping secrets.
She’s wrong.

In this gripping sequel to The Unbecoming of Mara Dyer, the truth evolves and choices prove deadly. What will become of Mara Dyer next?

The Evolution of Mara Dyer is the thrilling sequel to Michelle Hodkin’s smash hit The Unbecoming of Mara Dyer and is a worthy follow up that sees readers discover more mystery and even more uncertainty as our heroine Mara sets out to discover why she can do what she can do, even while she is continually haunted by ghosts of her past that aren’t quite dead.

Hodkin’s debut absolutely blew me away with its mystery, suspense and attention to detail and although it’s taken me some time to continue on with the series I was pleasantly captivated once more with this thoughtful novel that is full of intrigue and unanswered questions.

During the first novel, we as the reader spent the majority of the story questioning our heroine Mara’s sanity right alongside her as she navigated the strange goings on of her life. The unexplained and unexplainable occurrences warred with what was impossible and improbable to open our eyes to what Mara can do, even if we’re yet to know why.

In The Evolution of Mara Dyer, Mara is back…. with her boyfriend Noah Shaw alongside her yet again as the two set out to discover more about their mysterious abilities; something hindered by Mara’s old boyfriend Jude who is back from the dead and determined to make Mara’s life a living nightmare. Through a number of creepy events and occurrences Jude makes it clear he will stop at nothing to destroy Mara, even going so far as to help make Mara’s family question her sanity and mental stability. With Mara’s life spinning out of control, she finds herself placed in a mental health program that is tasked with helping those with mental illnesses get better, only New Horizons isn’t what it appears and as the novel progresses it becomes more and more clear that something sinister is going on…..

My mind is honestly still all over the place with this novel….even though I’ve finished it. Though I definitely loved it, I found myself with even more unanswered questions at the end than I had when heading into the story. Michelle Hodkin is masterfully weaving this story together; twisting certain elements together and hinting at a bigger picture to explain what is going on. Mara and Noah are being put through the wringer time and time again, and I’m right there alongside them as Hodkin tells their mysterious story.

I honestly have no idea where Michelle Hodkin is going with this story, but I’m certainly enjoying what I’m reading. Mara is a genuinely likable heroine, despite all of her issues. Or perhaps even because of them; I like that she’s fighting where she can, and her small acts of defiance impress me as we see her story unfold.

I’m quite happy with the romance within the story. It is not over powering and instead compliments the mystique and mystery of the story. Mara and Noah have a great chemistry and I love the way they react to each other; it’s impossible not to be swept up into their relationship when they are front and center. They seem to bring out the best of each other and I love the dedication Noah has towards Mara.

Source: Sent for review by Simon & Schuster Australia (Thank you Jen!)
Format: Paperback
Buy it: Bookworld | The Nile | The Book Depository | Amazon
My Recommendation: If you're a fan of supernatural mysteries then this will be right up your alley!
Cover: This cover is really perfect and goes perfectly with the first.....
Will I read sequel/continue with series: Yes! Can't wait to see how it all ends.