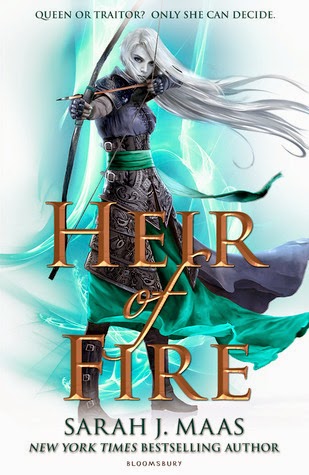 Consumed by guilt and rage, Celaena can't bring herself to spill blood for the King of Adarlan. She must fight back...

The Immortal Queen will help her destroy the king - for a price. But as Celaena battles with her darkest memories and her heart breaks for a love that could never last, can she fulfil the bargain and head the almighty court of Terrasen? And who will stand with her?

Heir of Fire is the expertly written third novel in Sarah J. Maas’s ongoing Throne of Glass series and depicts the next stage of Celaena's journey as Celaena finds herself in Wendlyn upon instruction from her King, where she begins making new connections, new discovers and even harder choices than ever before she races towards a destiny she is not quite ready for.

After the events of Crown of Midnight, Kings Champion and secret heir to the throne of Terrasen, Celaena Sardothien is jaded and lost after the loss of a close friend, and in a land far from home on a mission to assassinate the royal family of the home nation---- a mission she is dead set against completing. Unwilling to accept her birthright as Aelin Galathynius, Queen of Terrasen, Celaena travels to the home of her ancestors in Heir of Fire in the hopes of discovering clues to help finds the missing Wyrdkeys that are not currently owned by the King of Ardlan. Old grudges and long hidden secrets force Celaena to decide once and for all what is worth fighting for should she ever hope to see her people free once more.

At its base Throne of Glass is a fantasy tale; the series fueled by magic, power and intrigue set within a war torn kingdom controlled by a power hungry King. Yet Maas does an amazing job exploring the powerful ties that bind between family and friends with romantic liaisons between various characters driving the storyline as well. The complex and complicated relationships between the main character Celaena and the various others whose voices we also witness in this third person story make for some emotional and heartbreaking reading. Maas has to be commended for creating such a visually alluring world and layered characters whose motivations, drives and desires all have different impacts on the storyline.

Honestly, Heir of Fire was another emotional tale from Sarah J. Maas with the characters no strangers to loss within this series. This time it is not Celaena who losses someone close to her but rather another character we adore. There’s anguish, pain and betrayal littering the pages of this book, with our characters fighting for their people and their loved ones on both sides of the board. All the characters we have loved and loathed are back with Maas introducing new voices and individuals to the story, most prominently Aedion; Celaena’s cousin, Rowen; a Fae warrior who travels with Celaena on her journeys and Sorscha; a healer within the palace who helps Dorian love again.

Celaena is truly growing into a woman within this series. Though she has always been older and wiser than her years on account of all the horrendous things she has been through over the course of ten long years, Celaena takes great leaps in this book towards a strength few possess. Celaena has felt unimaginable pain and keeps getting knocked down time and time again—there are always new losses and new difficulties for this unwilling Queen, however Maas forces Celaena out of hiding in this book and makes her make some tough decisions about what she plans to do for her people and for her future.

As a Chaol fan I missed him a little in this book; he wasn’t as prominent as I would have liked, but I very much enjoyed his and Dorian’s individual storylines and dilemmas during Heir of Fire. Chaol working together with Aedin as he did seemed like an odd pairing, but I think there’s the possibility of a new friendship there between the two of them even if it is unexpected.

Maas includes a fantastic new character in the form of Rowan, a Fae warrior tasked with training Celaena who becomes a confidant and friend to our main character. At this point in time Rowan isn't a love interest for Celaena. Though they have bonded immensely in this one novel alone, Sarah J. Maas has made it abundantly clear that their relationship is strictly platonic--at this point in time. Who knows; that may change in the future if they continue to grow closer. Celaena has already had two romantic interests in the form of Dorian and Chaol so far, but I wouldn't put it past Maas to throw another into the mix, especially considering Dorian falls in love with someone new in Heir of Fire. Personally I'm on "Team Chaol" if any one asks, and I'm hoping Sarah J. Maas has some happy news in story for Celaena and Chaol fans in the next book....but only time will tell what happens next.

Having read Crown of Midnight and Heir of Fire consecutively I'm really ready for the next book. I have a feeling Maas has a lot planned as one stage of Celaena's journey ends and the other begins and I can't wait to see exactly what!

Source: Sent for review by Bloomsbury Australia (Thanks Sonia!)
Format: Paperback
Buy it: Bookworld | The Nile | The Book Depository | Amazon
My Recommendation: This series is a MUST READ for fantasy fans!
Cover: Fits perfectly with the previous covers.....
Will I read sequel/continue with series: YES!