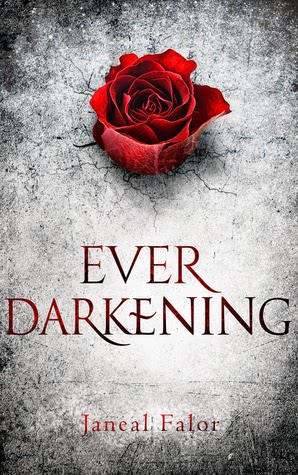 Perfection. Goodness. Elimination of evil. It's what seventeen-year-old Kaylyn has trained her entire life to achieve. But no one is prepared for the consequences of her actually defeating all evil people on the planet. Finally successful in her mission, Kaylyn faces an unfamiliar world, full of good people doing good things, in which she no longer has purpose.

When the skies grow dark, and a stranger from another village pleads for her help, her instincts roar to life. It turns out their perfect world isn't exactly what it seems. Kaylyn's new quest, harder than any she's been on before, will rip apart her friendships, her life, and her soul more than any evil man ever managed to.

Ever Darkening is the latest release by Janeal Falor and in a step away from her sensational Mine series is a standalone fantasy tale.

Ever Darkening introduces readers to a world where good versus evil plays a very important part in the lives of those who inhabit it and sees heroine Kaylyn make some tough choices if she ever hopes to protect those she loves. Kaylyn is a Zorpha, a member of group of elite, well trained warriors who are tasked with destroying evil individuals known as Malryx. In fact Kaylyn has been specially chosen to be the one to destroy the last living Malryx and rid the world of evil. However no sooner has Kayln’s blade fallen does it become clear that the balance between good and evil has been tipped dramatically and as strange things begin to occur, Kaylyn and her friends must fight their toughest fight yet as nature rises up in order to protect their fragile reality.

As a real fan of Janeal Falor’s Mine series, Ever Darkening is a hard book for me to review. Did I enjoy the story? Yes. Was it worth reading? Hmmm….yes. Did it blow me away? No. I will say this; Ever Darkening was a really unique tale and I definitely don’t think I’ve ever quite read anything quite like it. I’d describe it as a fantasy tale, but it had a science-fiction aura to it, with some of the names and terms used throughout the story.

The concept Falor explores throughout the story is definitely different from what I’ve seen before. It’s fresh and unique and takes a different approach to the way evil affects everything around it. I think Janeal Falor’s writing was spot on and the pace forward moving, although I found it was somewhat slow at times compared to her other novels.

The heroine Kaylyn was likable, although I found her a bit tedious at times where her feelings for one of her close friends Jorrin was concerned. With Kaylyn’s best friend Marsa in love with Jorrin since she was a child, Kaylyn fights what she feels for Jorrin and refuses to acknowledge it as much she can---something that just needed to be resolved in my eyes sooner than it was.

I loved the action and suspenseful moments during this story that often kept me highly entertained. With nature rising up, Kaylyn and her friends find themselves up against aren’t what you expect; something that makes for an interesting read.

The ending was very much a surprise in some sense and seemed to come on too swiftly for my liking, but although the resolution was not something I saw coming in the beginning I think it seemed fitting for the story and a natural evolution. However, as the novel ends, I really feel there’s more to see thanks to the changes to Kaylyn’s world and would like to see Falor explore the next chapter in Karyn’s life and her new world.

Source: Sent for review by the author (Thanks Janeal!)
Format: Kindle ebook
Buy it: Amazon | Barnes & Noble | Kobo | The Book Depository
My Recommendation: If you're a sci-fi and/or fantasy fan after something different, you may just enjoy this.
Cover: It's simple, but I quite like it.
Will I read sequel/continue with series: I've heard there's a companion novel to Ever Darkening featuring Marsa and I'd actually be quite interested in seeing through her eyes......