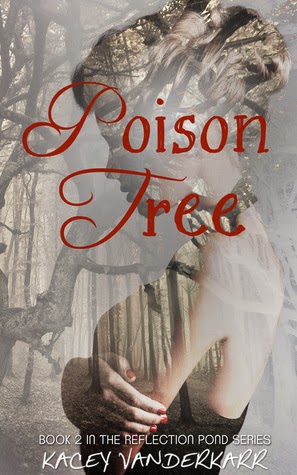 The road to the City of War is dangerous.

With their home in ruins, Callie and Rowan are Eirensae’s last hope of stealing the cauldron back from Fraeburdh. They must travel into the human world where the Fallen hide. The banished fae wait for Callie, desperate to sacrifice her before she comes of age.

If Callie and Rowan survive the journey, something worse looms in Fraeburdh. Rowan is destined for a dark family legacy too horrifying to accept, and his father is anxious to welcome him home. Once the truth is revealed, will Callie ever look at Rowan the same way?

Trapped between feuding cities lost in a centuries-old war, Callie and Rowan will face their biggest rivals yet, and neither of them will make it out unscathed.

Poison Tree by Kacey Vanderkarr is the sequel to Vanderkarr’s superb faerie tale Reflection Pond and is a wonderful follow up that features the same addictive chemistry, thrilling and harrowing storyline and character dynamic that made the first novel so great!

Picking up not far after Reflection Pond left off, Callie and Rowan find themselves in the human world, having escaped Eirensae as it went down in flames after a betrayal by one of its leaders. Knowing their friends have been captured and are in the clutches of the Fraeburdh King Arol, Callie and Rowan are down and beaten but not about to give up, even after another kidnapping sees Callie retreat into herself as the horrors of her past come to light once more and affect her present.

With Rowan facing the shocking discovery of his true heritage, he and Callie must face harsh truths and their feelings if they hope to rescue their people. Finally admitting how they feel about each other, Callie and Rowan discover new friends, new enemies and race towards a harrowing conclusion in this stunning sequel.

Wow! Can I just say that I seriously love this series! Honestly…..Kacey Vanderkarr writes an expertly told tale; her writing flows, there’s an exciting and driven storyline and characters who I just adore. One of my favorite self-published series featuring the Fae, Poison Tree easily lives up to its predecessor!

Vanderkarr continues to follow Callie and Rowan in Poison Tree, with their dual POV’s making for a well-rounded and detailed telling of the story. Both characters continue to be strong voices to follow and both bring something different to the table. Their chemistry and dynamic is as strong as ever, and Vanderkarr builds on their relationship naturally, seeing these two fractured and broken individuals find solace and comfort in each other. Rowan is still determined to keep the world out and Callie is afraid, having been seriously hurt in the past, but both managed to connect with the other in a beautiful and promising way.

Kacey Vanderkarr takes her readers into the world of Fraeburdh for the first time with Rowan and Callie delving into the palace in the race to save their friends. Along the way they make friends with a Fallen named Gunner and meet Rowan’s sister, who may or may not be what she seems.

Rich in danger, chemistry and excitement, Poison Tree is a great follow up to the first novel in this Reflection Pond series and takes readers into another entertaining stage of the story as Poison Tree races towards a climactic conclusion and ends just when you want to know more! I’m ready for the next installment to be released, stat!

Source: Sent for review by the author (Thank you Kacey!)
Format: Kindle ebook
Buy it: Amazon(Paperback) | Amazon (Kindle) | Barnes & Noble | The Book Depository
My Recommendation: This is a great faerie series--one not to be missed!
Cover: I don't love this cover as much as the first in the series. It's not quite as capturing.
Will I read sequel/continue with series: Yes! I can't wait until the next book.....