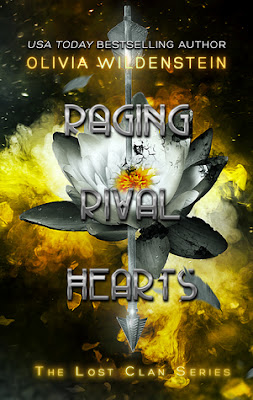 Raging Rival Hearts is a spinoff told from Lily's point of view.

I WAS A PRINCESS. I WAS ENGAGED. I WAS ALMOST IMMORTAL.

Breaking my engagement to the man I had loved my entire life was a dangerous move, one that got me expelled from the faerie isle. I’d known the risks, though. I’d known that if Cruz, Cat or my brother didn’t find a way to get me home, the fire in my veins would dwindle until it was gone, and with it my life.

Months slid by, and still nothing. With mere weeks left to live, I set out on a last adventure: discover if more Daneelies had survived the massacre, the same way Catori’s ancestor had. Although I’d decided to go alone, Kajika insisted on accompanying me.

I wanted to believe he was coming because he liked me. But I was still the enemy…the mute girl whom he could hear speak when no one else could…the one person who could track him when he didn’t want to be found.

Perfect for fans of The Mortal Instruments and The Vampire Diaries.

Raging Rival Hearts is the exciting fourth novel in Olivia Wildenstein’s The Lost Clan series and is a passionate and thrilling story featuring the lovely Lily Wood and brooding hunter Kajika as they fight to save Lily’s life.

Lily Wood is dying. After breaking off her engagement, Lily was locked out of the faerie world of Neverra and as a result the fire in her veins is slowly dwindling. Months have passed and as her brother and close friends have searched for a way for her to return home her body has finally begun breaking down. With only weeks left to live, Lily wants to make the most of the time she has left and do something good for those she loves. Setting out to find the elusive Daneelies seems like a great way to give her sister-in-law Cat something; a connection to her people. Yet Lily’s travel plans take an unexpected detour when the darkly haunted hunter Kajika decides to accompany her. Lily wants to believe that the stubborn and infuriating hunter is coming along for her but with their people enemies, Lily knows there can never be anything between them. So why does he constantly haunt her thoughts? As Lily’s time begins to run out, will she be able to find a miracle? Or is her time up just when she has found something to really live for?

The Lost Clan is a series I have come to highly adore. The world and storyline Olivia Wildenstein has created has never failed to capture my heart and soul and as Cat’s story came to a close, I was thrilled to learn I would still have the opportunity to immense myself once more in this mouth-watering and addictive series with Raging Rival Hearts featuring Lily and Kajika who I have loved in the past.

Picking up where the last instalment left off, Raging Rival Hearts was a tantalising and exhilarating story. Lily has always been someone who intrigued me, especially seeing as she was mute. The opportunity to get into the head and heart of this bewitching faerie who has always been so much of a mystery was so exciting and I have to say I think Wildenstein did a fantastic job with her tale.

I genuinely loved Lily as a person. She was so good and kind and everything I had hoped she would be. I adored the building tension she had with Kajika who has always been a favourite of mine (even though I was always Team Ace) and immensely loved seeing their relationship develop. It was electric in a simple, effortless way but so consuming at the same time. Each tension charged moment they shared where it was clear they were coming to care deeply about one another was so addictive. I simply wanted to see as much Lily and Kajika as possible; they were so good together.

Raging Rival Hearts is not without its heartbreak and loss. Olivia Wildenstein keeps her readers on their toes as Lily and those around her fight for a way to get her back into Neverra in time to save her life. Ultimately this comes at a cost but this emotionally development seems to fit in very well with the storyline that is full of moments or romance, friendship and family.

As this fourth novel ends beautifully and better than I could have ever asked for, Olivia Wildenstein leaves me dying for the release of the fifth and final novel Reckless Cruel Heirs that is set to feature a certain baby I came to love in Raging Rival Hearts and another faerie child who we’re yet to meet but I just know I’m going to adore based on who I’m sure her parents are!

A fantastic novel in a breathtaking and addictive series, I highly recommend Raging Rival Hearts and the entire Lost Clan series for those who love adventure, excitement and thrilling romance with bite and flair!