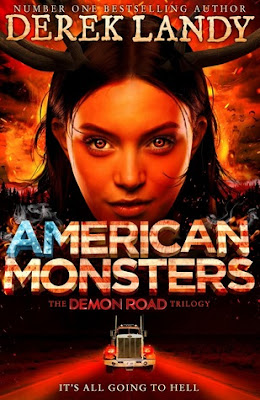 Amber closes in on her murderous parents as they make one last desperate play for power. Her own last hopes of salvation, however, rest beyond vengeance, beyond the abominable killers - living and dead - that she and Milo will have to face.

For Amber's future lies in her family's past, in the brother and sister she never knew, and the horrors beyond imagining that befell them.

American Monsters is the third and final novel in Derek Landy’s Demon Road Trilogy and is a comedic and action paced ending to the series.

Having recently agreed to be Astroths representative and collect those foolish enough to hope to escape him, Amber finds herself hot on the heels of her murderous parents as she and Milo follow them across the country. Hoping to find a way to escape her deal with the Shining Demon herself, Amber and Milo must come out with a plan to outsmart Astroth that doesn’t get them killed, which is easier said than done…..

American Monsters finishes off Derek Landy’s demonic adventure in fitting form. On the whole, the Demon Road Trilogy has been easy enough to read. Perfect for those who have loved demonic shows like Supernatural and their books with a bit of bite, there’s no doubt in my mind that Derek Landy has written something unique and original with this series even if admittedly there were times when the series felt off to me.

Although the series failed to reach the heights I hoped it would reach in my eyes, it has been a decent enough read and I think Landy packed enough action, humour and sarcasm into the story to keep his readers satisfied. Personally, there were some times where the series faltered for me—mainly as I failed to connect with some of the characters on a deeper level and as things turned strange. Still, I'm glad I gave the series a go and am happy to have seen it out to the end.

As an intricate and unique story with a lot of different paranormal goings on—demons, ghostly hauntings, vampires, hellhounds etc—there is plenty to discover within American Monsters and Demon Road all together. This series will be a great addition to most male readers to-read-list and is something to give a go if you’re looking for something light, not overly serious and easy to follow.

Source: Sent for review by publisher (Thank you Holly!)
Publisher: Harper Collins
Format: Paperback
Release Date: 26/08/2016
Purchase: Bookworld | Booktopia | The Book Depository | Amazon
Final Thoughts: A decent ending, this series is perfect for the male reader and those who like their demonic tales swimming in sarcasm.