Book Shelf: A Corner of White (The Colours of Madeleine #1) by Jaclyn Moriarty 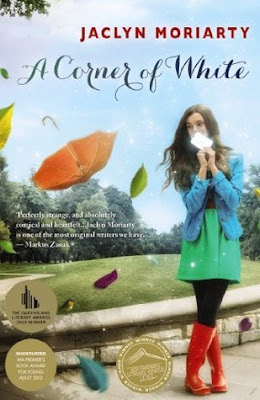 Elliot Baranski lives in Bonfire, the Farms, the Kingdom of Cello - where seasons roam, the Butterfly Child sleeps in a glass jar, and bells warn of attacks from dangerous Colours. They are worlds apart - until a crack opens up between them; a corner of white - the slim seam of a letter.

Elliot begins to write to Madeleine, the Girl-in-the-World - a most dangerous thing to do for suspected cracks must be reported and closed.

But Elliot's father has disappeared and Madeleine's mother is sick. Can a stranger from another world help to unravel the mysteries in your own? Can Madeleine and Elliot find the missing pieces of themselves before it is too late?

A Corner of White introduces readers to Madeline Tully, a fourteen year old girl who lives in Cambridge, England with her mother and Elliot Baranski a fifteen year old boy who lives in the Kingdom of Cello. Cello and the World have existed side by side for many years without interaction but it’s not until a crack opens up between the two that Madeline and Elliot begin corresponding through a series of letters exchanged between them and soon begin to form and unlikely friendship.

In all honesty it took me about halfway through A Corner of White to really get into the story. Told through third person and switching back and forth between the Kingdom of Cello (pronounced Chello) and the real World it was easy to get confused as Moriarty began to explain the workings of her detailed world. The characters within Moriarty’s tale have very unique voices and ways of viewing the world—which I ended up loving—but it did take me a while to connect; especially in the beginning when it seemed like Madeline and a few of the other characters were pottering around about nonsense and things that didn’t seem important.

That being said, after a while I began to appreciate seeing the day to day lives of our characters and see the issues they were going through and attempting to overcome. I found Cello to be a vivid and compelling world that mixes elements of modern technology with magic and mystery. Jaclyn Moriarty really has created something unique and different with Cello and introduces readers to different concepts I’ve yet to see before in books. I can’t even begin to accurately explain Colours and have myself accurately describe their workings and history, but within this novel and within the world of Cello it all makes sense.

Learning about the cracks within the kingdom and their meanings, the Butterfly Child, the Farm and all the different Colours---Moriarty drags you kicking and screaming into her lush world and with the turn of every page I found myself liking Madeline and Elliot more and beginning to dream of the day they may meet. I began to care about Elliot’s search for his father and the truth behind his disappearance, the town of Bonfire that Elliot calls home and all the eccentric, alluring characters who live within it, and I honestly wanted to know more……

Moriarty ages her main characters young (fourteen and fifteen respectably) and I can only hope this is a precursor for growth in future books, but even their voices seemed older at times. Madeline in particular has a powerful way of seeing the world and expresses really deep and meaningful thoughts about science, literature and life in general. Elliot on the other hand is a heartthrob in his hometown and is intelligent, athletic, kind and determined—all qualities that make him enjoyable to follow.

Jaclyn Moriarty fills her story to the brim with different characters and I enjoyed seeing their different dynamics and purposes within the tale. I ended up loving the life they gave the world of Cello. With a couple of great twists and surprises at the end of the first book, A Corner of White has me eager to jump straight into the next novel!

Source: Sent for review by Pan Macmillan (Thank you guys!)
Format: Paperback
Buy it: Bookworld | The Nile | The Book Depository | Amazon
My Recommendation: Fans of YA fantasy are sure to appreciate this unique tale.
Cover: It's pretty and colorful--I do think it suits the story.
Will I read sequel/continue with series: Yes. Looking forward to more.