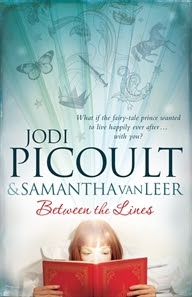 What happens when happily ever after... isn't?

Delilah hates school as much as she loves books. In fact, there's one book in particular she can't get enough of. If anyone knew how many times she has read and re-read the sweet little fairy tale she found in the library, especially the popular kids, she'd be sent to social Siberia... forever.

To Delilah, though, this fairy tale is more than just words on the page. Sure, there's a handsome (well, okay, hot) prince, and a castle, and an evil villain, but it feels as if there's something deeper going on. And one day, Delilah finds out there is. Turns out, this Prince Charming is real, and a certain fifteen-year-old loner has caught his eye. But they're from two different worlds, and how can it ever possibly work?

Written by mother and daughter duo Jodi Picoult and Samantha Van Leer, Between the Lines is a fresh, utterly magical novel that explores what really happens when a book is closed in a fun, romantic tale that is sure to captivate from start to finish!

This is one of those rare books that simply takes your breath away with its uniqueness. A story that’s beautiful in its simplicity yet stunning in its rich, unique storyline, Between the Lines is like nothing I’ve read before. It’s a wonderful example of sheer imagination, with its fun, engaging storyline and vivid characters. Honestly, who ever thought about what happens when the story is finished or put down? I know I certainly hadn’t before now, but Jodi Picoult and her talented daughter Samantha Van Leer sure have, blessing us with this unique novel that’s literally magic.

Told in duel perspectives between main characters Delilah and Oliver, and featuring chapters of the actual “story” within the story, this book was simply a joy to read. I picked it up planning on reading only a few chapters, but quickly found myself engrossed and unable to put it down. Really, it’s just a catching storyline—a fictional character who no longer wants to be a part of the story—and you can’t help but want to know what happens. Will Oliver become a part of Delilah’s world or will he forever be stuck within the book, forced to relive the same story over and over again?

With perfect, flowing writing and littered with beautiful pictures and graphics, Between the Lines held my attention from start to finish as Delilah and Oliver fought to get our reluctant prince out of the book and into the real world. I must say I found the stunning pictures that accompanied the story to be a wonderful touch. Not only were they beautiful to look at, but they added a new layer to the story as they illustrated the scenes unfolding before your eyes.

Oliver and Delilah shone as our main characters—two very different people; one a flesh and blood teenage girl and the other a fictional book character that yearned for more, and yet they connected so well. Seeing them interact and stumble their way into getting Oliver out of the book and into Delilah’s world was just purely wonderful and held so many moments that made me smile.

From start to finish, Between the Lines was just a fantastic book to read. Whether you’re a fairytale fan or are just a reader looking for something a little bit different and yet allows you to use your imagination, this is the book for you! Easily pulling you into this exciting, captivating fairytale featuring a modern twist, Between the Lines is one book that won’t disappoint!

Source: Sent for review by Allen & Unwin (Thank you guys!)
Format: Paperback
AU Release Date: Available now!
Buy it: Booktopia // The Nile // The Book Depository
Recommendation: This is a the perfect book if you want something fun, fresh and magical.
Cover: I LOVE our Aussie cover! I think it's the best out of the whole lot.
Will I read sequel/continue with series: As this is a stand alone, I can't read the sequel, but I might read more from these authors if they wrote similar books.