Book Shelf: The Edge of Everything by Jeff Giles 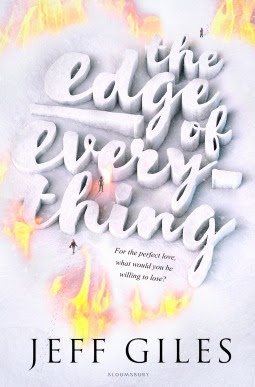 For the perfect love, what would you be willing to lose?

It’s been a shattering year for seventeen-year-old Zoe, who’s still reeling from her father's shockingly sudden death in a caving accident and her neighbors’ mysterious disappearance from their own home. Then on a terrifying sub-zero, blizzardy night in Montana, she and her brother are brutally attacked in a cabin in the woods—only to be rescued by a mysterious bounty hunter they call X.

X is no ordinary bounty hunter. He is from a hell called the Lowlands, sent to claim the soul of Zoe’s evil attacker and others like him. X is forbidden from revealing himself to anyone other than his prey, but he casts aside the Lowlands’ rules for Zoe. As they learn more about their colliding worlds, they begin to question the past, their fate, and their future.

The Edge of Everything is Jeff Giles debut novel and is a unique and intriguing start to what looks like a series perfect for those who love their YA with a supernatural edge.

Seventeen year old Zoe’s had a heartbreaking year so far with her father passing away in an unexpected caving accident and her neighbours disappearing under mysterious circumstances. During a freak snow-storm Zoe is looking after her little brother Jonah when they are attacked by a violent madman only to find themselves rescued by the mysterious and glowing X. X is a bounty hunter, tasked with delivering evil souls to a hellish place called the Lowlands. Having known nothing other than life as a prisoner and bounty hunter X isn't prepared for Zoe, the first light he's ever known in the darkness that is his life. Zoe and X are from two different worlds but as they fight for their budding love they're in for the fight of their lives and with secrets coming to light that will change everything, forcing these two star crossed lovers to make the hardest choices of their lives.

As a highly anticipated read of 2017 The Edge of Everything was a decent start to Jeff Giles new series but was a bit hit and miss for me at times too. Featuring a fabulous premise, the concept within The Edge of Everything was really intriguing and clearly well thought out. Yet I felt a bit disconnected from the novel at times. I think the idea was wonderful but the execution could have been a bit better.

While I felt Jeff Giles seemed to have all the right elements, I didn't feel like there was any depth to the story. Especially where the main characters were concerned. As individuals, I liked Zoe and X enough and even enjoyed them together but I didn't really feel their romance. It seemed to come on too fast, too soon and as such this seemingly epic, "perfect" love was unbelievable to me. It felt forced and while I was rooting for Zoe and X to work things out, I wasn't necessarily as invested in their relationship as I would have liked to have been.

Though there was something that kept me from being one hundred percent invested in The Edge of Everything, there was a lot I did like and I find myself interested enough to continue on with the series. The ending was somewhat exciting and leaves a lot of possibilities. I'm keen to see the characters find their way back to each other and will be on the lookout for the sequel in the future to see what Jeff Giles does next.