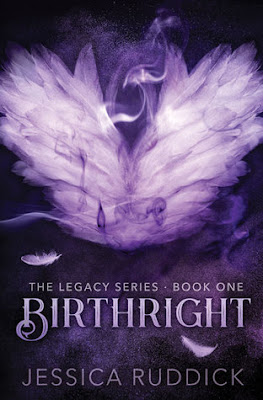 How do you live with yourself when you decide who dies?

Ava Parks would have killed for an iPod for her sixteenth birthday. Anything would have been better than coming into her birthright of being a seeker for the Grim Reaper, an arrangement made by her fallen angel ancestor in exchange for his re-admittance to heaven. And she isn’t just any seeker—she finds souls that have the potential for becoming angels and sentences them to death. A year and two souls into her role as a seeker with her conscience overflowing with guilt, Ava comes up with a plan to thwart the system. When it goes awry, she is forced to submit the name of a classmate, Cole Fowler, an ornery, rough around the edges guy who always seems to come to her rescue, whether she likes it or not. Her feelings for Cole prompt her to intervene, and she saves him from death, upsetting the Grim Reaper’s agenda.

While Ava schemes to find a way to save Cole, she learns he has some secrets of his own. She lets him believe he is protecting her, and not the other way around, until a final showdown with the Grim Reaper forces Ava to make choices Cole may never forgive.


Birthright is the first novel in Jessica Ruddick’s Legacy series and is an utterly addictive read that kicks off a promising series in a tale full of sass, humour and sensational character chemistry that left me completely entranced from the opening page and dying for more!
Ava Parks is a seeker; a gift she received on her sixteenth birthday when her mother finally explained their family history. Able to see the auras that surround people, its Ava’s job to seek out those with white auras, the purest and best of humanity, and provide their names to Grim Reapers so that these individuals may have a shot at becoming angels. Giving these souls such an opportunity should seem like a blessing, but when you’re ultimately sentencing someone to death, how do you live with yourself? This question becomes increasingly clear with Ava’s latest assignment; where the white aura she finds belongs to arrogant, moody, too-charming-for-his-own-good classmate Cole Fowler who suddenly seems to be rescuing Ava left right and centre. Struggling with having to give up Cole’s name, Ava sets out to beat the system, but with Cole’s own secrets catching up to him, will Ava be able to protect the boy she’s coming to care about? Or will the grim reaper get their man after all?
Wow! Having just finished Birthright, can I just say how absolutely I LOVED this book? Seriously. I really adored this! From the very opening chapter the story completely sucked me in. Ava was a strong voiced character who had the perfect balance of heart and vulnerability while also managing to be sassy and full of sharp wit. In many aspects Birthright is perfect if you’ve enjoyed Rachel Vincent’s Soul Screamer series and will keep you very much entranced by the delectable chemistry and budding relationship that develops between Ava and Cole as the novel unfolds.
There’s a really good (pardon the pun) aura to Birthright that becomes clear from very early on in the story. Jessica Ruddick sets the pace well; letting us just get a glimpse into the world of seeker’s and aura as our main character Ava and her love interest/protector Cole get to know one another. I still feel like there's so much to this world to learn and that Ruddick has only let us see the tip of the iceberg.
Ava and Cole will of course steal your heart with their strong, likeable personalities and electric dynamic together. It was highly entertaining, and at times endearing seeing them get to know one another. There's some great dialogue and witty, flirty banter as they fight the inevitable. Ava has some serious difficulties to face if she wants to protect Cole and as she faces her demons, Jessica Ruddick will have you wondering how this smart, sharp and feisty teenager will save Cole from certain death.
Fast paced and oh so good Birthright was a brilliant read and leaves me dying to see what is in store for Ava and Cole next after the shocking ending of this first instalment. I can't wait to read the sequel and I highly recommend Birthright if you're looking for a YA with a likeable heroine, wonderful romance and perfect chemistry!
Rating: