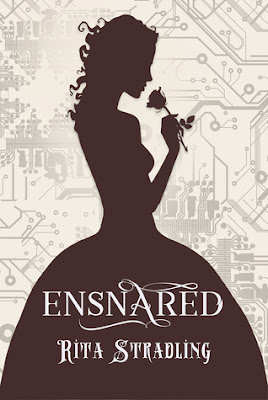 A Near-Future Retelling of Beauty and the Beast

Alainn’s father is not a bad man. He’s a genius and an inventor. When he’s hired to create the robot Rose, Alainn knows taking the money is a mistake.

Rose acts like a human. She looks exactly like Alainn. But, something in her comes out wrong.

Believing that a life of servitude lies ahead, Alainn finds a very different fate awaits her in the company of the strange, scarred recluse.

Ensnared by Rita Stradling is Beauty and the Beast meets I, Robot in this fairytale retelling with a sci-fi twist that will be perfect for those who love Sarah J. Maas and Marissa Meyer.

Set in a futuristic world, a young woman named Alainn Murphy finds herself imprisoned in an artificially controlled tower when her inventor father is commissioned to create a robot named Rose to be the companion of a mysterious and reclusive millionaire. Made in Alainn’s image, Rose looks like a human and acts like a human, but Alainn knows there’s something sinister lurking behind Rose’s eyes. To save her father from a prison sentence should he not turn over Rose, Alainn take’s the robots place, but passing for an artificial machine is harder than it looks. And as Alainn begins to slowly get to know her captor, it becomes clear the scarred man who interacts with her is much more than he first seems…

I have to say, I thoroughly enjoyed Ensnared, devouring it in only a couple of sittings. Capturing my attention the moment I realised it was a Beauty and the Beast retelling with a science fiction twist, Rita Stradling quickly had me enthralled with the story from the opening few chapters with her strong characters and delightful world.

Unfolding through Alainn’s POV with the occasional different character thrown in, Ensnared details a near futuristic world where robots and auto machines are every day ways of life. Refreshing and fun, I liked the world Stradling has created and wished to have seen more of it. The robotics were intriguing, especially the AI monkeys who were just beyond adorable and who I would take home in a heartbeat if they were real.

I really liked Alainn and Lorccan as the main characters and was very much behind their relationship. Yes, I admit they weren’t perfect and there were a few small things that could have been tweaked had we had time—Lorccan’s “curse” and Alainn’s experience of abuse in the past—but given that this is a standalone novel, I think Rita Stradling worked well with the time she had.

Alainn was strong but sweet and very capable. She stood up for her loved ones and was willing to fight for what she wanted, while Lorccan was an isolated recluse, afraid to have people see his scars who was used to darkness. They went well together as a couple and became happier people as the novel progressed and they spent more time together.

With Lorccan having lived in complete isolation and having known nothing outside his home, I enjoyed seeing his relationship develop with Alainn. As the only two humans in Lorccan’s home, they spend a number of hours together and though these start out grudgingly on Alainn’s part, they grow to be something she deeply enjoys. For some reason I started the novel expecting it to be YA, so I wasn’t necessarily expecting the sex scenes and physical aspect of Alainn and Lorccans romance, but again, I felt this fit in well with the story and was done well. Although how Lorccan didn’t know Alainn was human and not a robot based on her body’s natural reactions, I’ll never know.

Full of wonderful romance and danger, there were only a few things that kept Ensnared from being a flat out 5 star book for me. I felt there were a few vital parts missing from the story or could have been explored a bit better. That being said, I did really love Ensnared and highly recommend it!